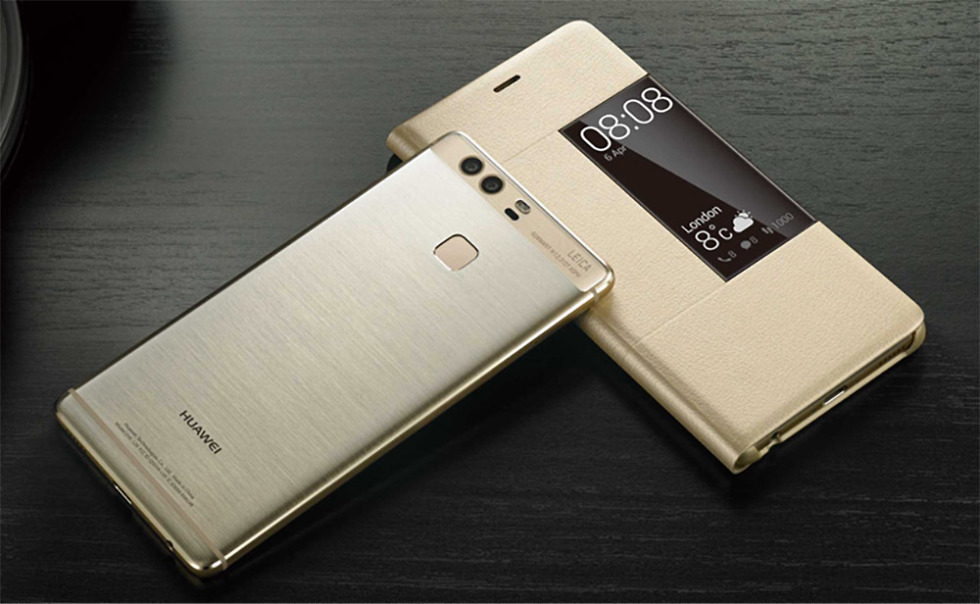 This morning, at an event in London, Huawei announced two new P-series flagship smartphones, the P9 and P9 Plus. Neither will make its way to the US any time soon (probably never), but since they are the new 2016 flagships from a company aiming to take on Samsung and Apple (and may be able to do it), the phones are worth talking about, especially since they were also co-engineered with Leica, the German camera expert.

With the Huawei P9 and P9 Plus, you are getting aerospace-class aluminum bodies with metal polishing, 5.2-inch and 5.5-inch 1080p displays, Huawei-made Kirin 955 (64-bit) processors, 3GB/4GB RAM and 32GB/64GB storage (depending on model of each), 3000mAh and 3400mAh batteries (with fast charging), fingerprint sensor, 12MP dual cameras (monochrome and RGB), 8MP front cameras, and Android 6.0 underneath Huawei’s EMUI 4.1. In terms of specs, outside of having a QHD display, they have all that you could ask for in a flagship phone.

In the camera department, where Huawei co-engineered each phone’s dual camera with Leica, you get two shooters, one RGB and one monochrome, to deliver better low light imagery, better contrast, and “superior detail.”You can even shoot individually with the monochrome camera to take stunning black and white photos that aren’t enhanced by a filter – they are actually taken in black and white. The processing on the phone is working some magic between the two cameras to create a camera performance that Huawei says destroys both the Galaxy S7 and iPhone 6s Plus.

The phone begins shipping April 16 all over the globe, just not in the US. We’ll see what we can do to get a hold of one, though.

London – April 6, 2016 – Today at an exclusive launch event at London’s Battersea Evolution, Huawei Consumer Business Group unveiled the much anticipated Huawei P9 and P9 Plus. Created in collaboration with Leica, the dual-lens P9 sets a new standard in smartphone photography.

The Huawei P9 is the first smartphone co-engineered with the global iconic brand, Leica Camera AG. The P9’s dual-lens camera takes smartphone photography to the next level, allowing people to capture both vivid colors and striking black and white images. Huawei’s new B3 Talkband wearable wristband also made its global debut.

A groundbreaking moment for event guests included a first look at an exclusive trailer of the new Huawei P9 TV commercial starring Henry Cavill and Scarlett Johansson, Global Product Ambassadors for the Huawei P9 series. Showcasing the connection between two global stars in Shanghai and Hollywood, the trailer symbolizes the partnership between Huawei and Leica and the intersection of color and black and white. Cavill was joined at the P9 launch by iconic photographers Mary McCartney and David Guttenfelder from National Geographic as well as BBC Global News CEO Jim Egan, Condé Nast Chairman and Chief Executive Jonathan Newhouse, Vogue China Publisher Anita Chang and Huawei UK Board Members Sir Andrew Cahn and Dame Helen Alexander.

“Huawei is excited to give P9 users the best smartphone photography experience by leveraging the unrivalled capabilities of Leica, the leader in the world of imaging for more than 100 years,” said Richard Yu, CEO, Huawei Consumer Business Group. “Consumers around the world use their smartphones to take billions of pictures each year, making photography critical to user experience. P9 users can now capture images with unmatched clarity, richness and authenticity, with a masterfully designed and powerful smartphone that looks and feels incredible.”

Integrating the design values and engineering excellence of Huawei and Leica in a smartphone photography system co-engineered by the two companies, the P9 brings together best-in-class hardware and software, from optical lenses, to sensors, to image processing algorithms, empowering users to capture the highest-quality images.

Key to the P9’s superlative imaging capabilities is a dual-camera design that fully unleashes the power of Leica’s optical lenses, renowned for precision and attention to detail, and subject to the industry’s most stringent quality screening requirements. The RGB camera on the P9 specializes in capturing color, while the monochrome camera is outstanding at acquiring picture detail. The two rear cameras of the P9 work in tandem to enable users to create images of superior detail, depth and color. The P9 truly excels in low-light conditions, as the dual-camera design guarantees more light and detail can be captured.

Each picture taken by the P9 carries the unique emotional resonance and timelessness that are the hallmarks of Leica, as users may choose between three film modes: Standard, Vivid Colors and Smooth Colors, depending on their personal preferences. With meticulous calibration of the P9’s camera parameters, each film mode faithfully renders the authentic color and style of Leica. By selecting the monochrome mode, P9 users can use their devices as a true monochrome camera to capture powerful and evocative black and white images of superior quality.

Deploying Huawei’s Hybrid Focus technology, the P9 captures images with superior speed, accuracy and stability. The P9 supports camera focusing based on three methodologies – laser, depth calculation and contrast – and automatically selects the one that yields the best result in any given environment.

The wide-aperture photography feature on the P9 allows users to experiment with innovative visual effects to create unique images and content. The P9 makes it easy to adjust the camera aperture to create bokeh and other depth-of-field effects, while keeping the main object in sharp focus.

“Leica and Huawei share an uncompromising commitment to imaging excellence, and our partnership will put outstanding photography into the hands of more consumers around the world,” said Oliver Kaltner, CEO, Leica Camera AG. “We are deepening our collaboration to give users a more optimal smartphone photography experience.”

The P9 is a masterpiece of state-of the-art industrial design, with the same minimalist design DNA as earlier products in Huawei’s acclaimed flagship P-series of premium smartphones. Each P9 device is a perfect construct of superior-grade 2.5D glass and an aerospace-class aluminum, with diamond-cut edges rounded out by carefully balanced curvatures.

The 64GB version of the P9 comes in a stunning and unique Haze Gold finish, setting new industry standards in industrial design, with the use of techniques including brushed hairlines and metal polishing at micron-level precision to create a translucent metal surface. Additionally, the Ceramic White version of the P9 is smoother than the painted bodywork of premium cars, reflecting and refracting light to present different shades of awe-inspiring colors as ambient conditions change.

The P9 is equipped with the power, connectivity and speed that today’s high-end smartphone user expects from Huawei. With a 5.2-inch 1080p display, the P9 is powered by the new Kirin 955 2.5GHz 64- bit ARM-based processor for leading-class mobile performance. The 3,000mAh high-density battery offers P9 users outstanding mobility and battery life.

Leveraging Huawei’s industry-leading capabilities in telecommunications, the P9 and P9 Plus offer unrivaled new features including a virtual-triple-antenna architecture, designed for users who need robust and seamless connectivity to cellular and Wi-Fi networks to fully harness the power of the mobile Internet no matter where they are in the world.

The P9 and P9 Plus also protect users’ privacy and information security with Huawei’s world-leading biometric fingerprint recognition technology. The enhanced fingerprint sensor allows users to personalize and safeguard their devices by significantly lowering the possibility of fraudulent or accidental device access, while also ensuring users can quickly and securely access their smartphone.