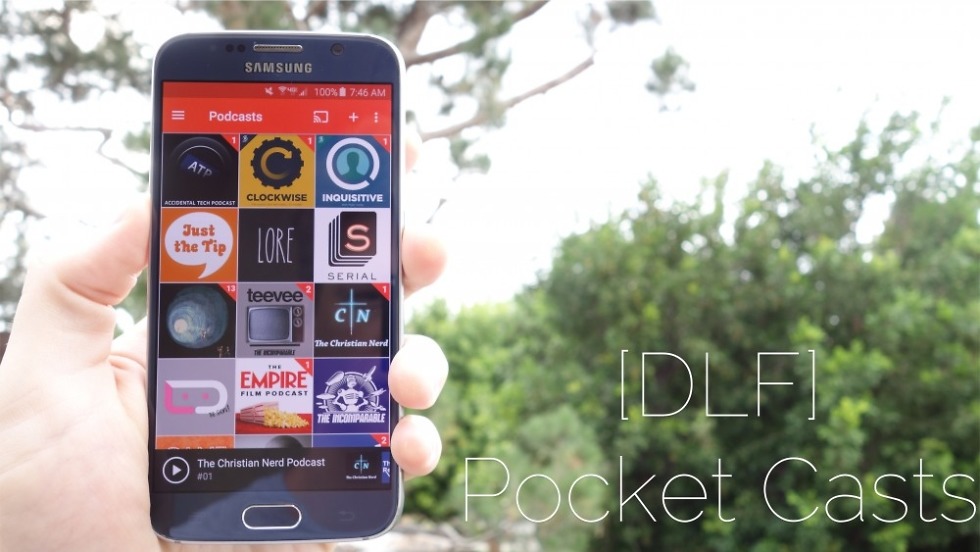 I listen to a lot of podcasts; twenty-two to be exact. I drive for at least an hour total commuting to and from work and I usually take an hour lunch break, so I always have at least two hours a day to fill with podcasts and music. Because I spend so much time listening to podcasts, it’s really important to me that I have a good looking, well designed podcast app.

Pocket Casts features Material design with delightful animations, especially the play/pause transition. At first it might be a little confusing where to go to actually listen to stuff once you’ve subscribed to some feeds. The app defaults to the Podcasts tab, which shows the artwork for all of your shows. If you want to find a specific show and listen to its episode or browse through previous episodes, this is the place to go.

If you just want to quickly jump into an episode, though, then the Audio section is where you want to be. Audio lists every single one of your episodes in chronological order. I’m in Audio 90% of the time. The app also has Unplayed, Video, and Downloaded sections, but Audio is probably where most people will spend their time. You can also create an episode filter, which would allow you to set up a custom section say for your favorite shows that you want to listen to as soon as they drop regardless of where you are in another show.

When playing an episode Pocket Casts starts playback with the mini player at the bottom of the display. Tapping on the mini player brings up the full playback controls and show art with a background that matches the coloring of the show art. Swiping from right to left reveals the Up Next section. Up Next is basically a way to create a quick podcast. Usually I’ll use this when I’m about to drive somewhere and I want to finish an episode, but I know I’ll still be on the road when it finishes. I’ll start the episode I want to finish and then tap and hold on the next episode I want to listen to and select Add to Up Next. You can add as many episodes as you want, which I prefer to making playlists (although you can make playlists if you prefer). Swiping from left to right on the album art reveals the show notes for the episode you’re listening to.

Pocket Casts also allows you to adjust the playback speed, remove silences from a show, and boost the volume. These settings can be applied per podcast or across all shows. When turning on Remove Silences the app will immediately tell you how much time you’ll save, which is a nice feature.

All of these great features are nice for your phone, but what if you want to listen somewhere else? Shifty Jelly has you covered. Pocket Casts works on Android tablets, the web, and iOS devices. All of those devices sync your episodes and playback times so you can jump between devices without issue. Oh, and it has Chromecast support so you can kick the episode you’re listening to over to the TV if you’d like.

Now, maybe you’re reading this and thinking that you like the idea of listening to podcasts, but you don’t know where to start. Let me help! Below are some of my favorite shows to listen to:

Pocket Casts is far and away the best podcast app in every category conceivable. Seriously, don’t even bother looking at the other apps out there. It’s not worth your time. There’s a reason Pocket Casts is making so much more money on Android compared to iOS: they don’t have any serious competition on Android. Even on iOS, where they do have serious competition, they’re a serious contender for the best app. If you listen to podcasts on Android, this is the app you need. Go get it.