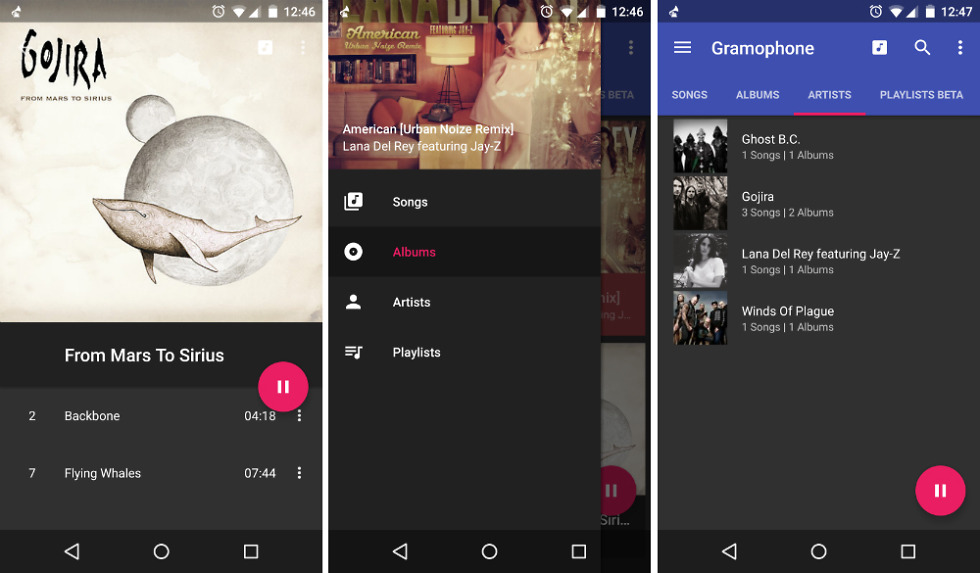 During last year’s Google I/O, when the company announced and displayed Material Design for the first time, they previewed a non-existent music app that looks nothing like today’s Google Play Music. Of course, what Google showed off was simply what Material Design could be, and thanks to a soon-to-be-released app called Gramophone, folks who wished they had that music player might be in luck.

Currently in private beta, Gramophone does Material Design right. With a hovering playback button, smooth animations, and colorful graphics, Gramophone is essentially what we wish Google Play Music was today.

On the main playback page and album overview page, the app’s colors shift to match that of the album art, which is a strikingly nice touch by the developer. In addition, it features the beloved pull out menu, flat icons, and Last.fm integration to pull in additional artist information. And finally, the app allows you to edit tags, making the organization of on-device music files much easier.

The one downside Gramophone has is its inability to access your Google Play Music library. It’s not the app’s fault, it’s Google’s. Until an API is released to access a user’s library through a third party app, which will likely never come thanks to the music industry’s attorneys, you are limited to music on your device. While no access to Google Music stinks, I know for a fact that many of you do not use Google’s music service, so this app would be good for you to check out.

If you are interested in checking out the private beta, head over to the Google+ community and request an invite. If accepted, you will be allowed to download the app straight from Google Play for testing purposes. According to the community page, a public beta is set to launch March 29.