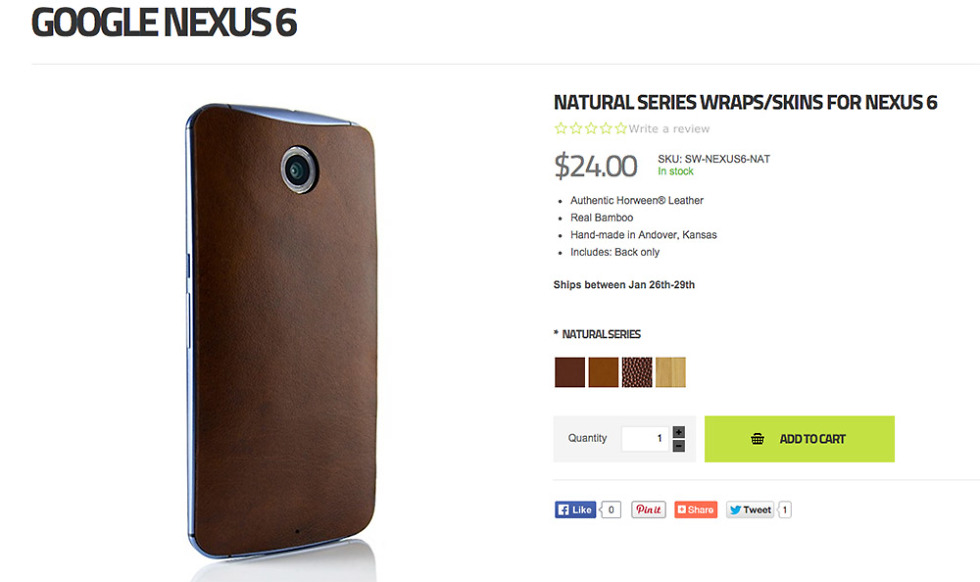 Most consider the Nexus 6 to be a monster-sized version of Motorola’s Moto X (2nd gen). The two devices certainly look very similar with their dimples, metal frames, and curved bodies, it’s just that the Nexus 6 is 13x the size of the new Moto X (yes, we’re exaggerating a tad). But outside of the size, there is also one other unfortunate difference – the Nexus 6 is actually Google’s phone. In other words, it doesn’t have the customizable options that Motorola’s flagship has through Moto Maker. That means no leather or wood or custom colorways or branding. You can either go Midnight Blue or Cloud White (assuming you can find either in stock anywhere).

What if you want a wood or leather Nexus 6, though? Slickwraps may have an option that will get you close to a Moto Maker-made Nexus 6.

Today, they released their “Natural” series of wraps/skins/backs, which just so happen to include Horween leather (same leather used on the Moto X and Moto 360) and bamboo options. Currently, the “Natural” series offers bamboo, tan leather, brown leather, and even that NFL-esque football leather. Yep, your phone can join NFL media pundits in Deflate-gate.

The new skins/wraps are like their other products in that they are essentially a big sticker that adheres to your phone like a cover.