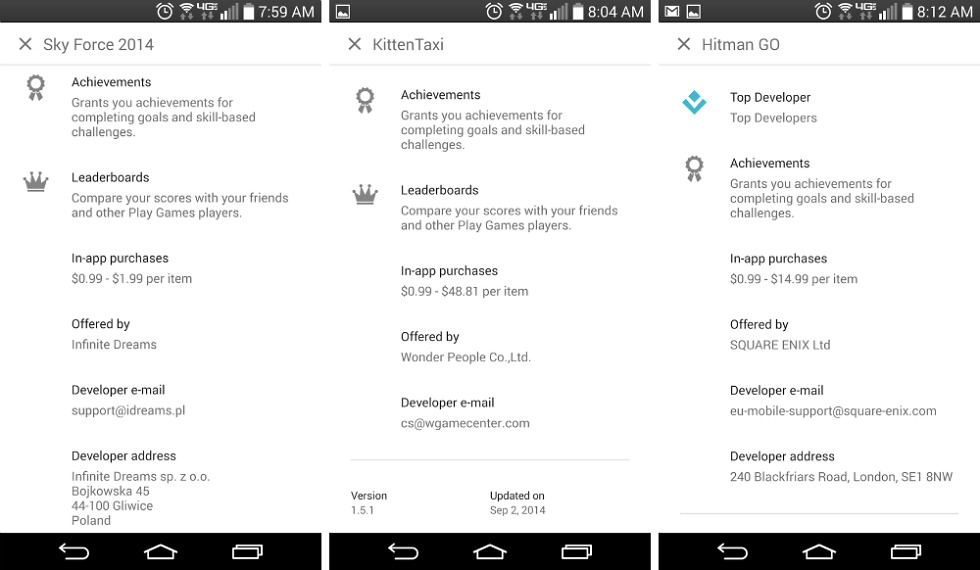 This week, users of Google Play will have new information to look over when browsing applications and games on Google’s mobile marketplace. As readers are pointing out, Google has begun publishing in-app purchase price ranges in an app’s description, as well as mandating that developers provide physical addresses to appear on app listings that feature a purchase price or IAPs.

When these changes were being made, indie developers were not happy about the addition of their physical addresses hitting the web for all to see. Unlike big app development companies, many indie app makers work right out of their home, meaning people will be seeing their physical home address and not one which leads to a corporate office. If you could imagine, that is somewhat scary if you take into account how insane people get over their Candy Crush and Flappy Bird games.

Unfortunately, reports claim that Google’s move is in direct response to a court decision made in Europe that was put in place to protect mobile consumers who buy applications. In the court’s eyes, developers need to be more accountable for the software they sell to users. However, Google has offered no official word or statement on why exactly these changes were placed in the developer console.

There are countless threads on developer forums and reddit, hoping to find a loophole so developers will not need to post their home addresses, such as a PO Box or listing the post office as their physical address. As of right now, it appears no real fix has been found for the situation. Developers have 30 days to list a physical address before Google takes action on their account.

Besides that depressing matter, Google is also listing in-app price ranges, detailing just how much you can spend inside of an application. To us, this is a great idea, just so users can see how ridiculous a few companies are with their IAPs. Please, no one should spend $99 on Candy Crush or $50 on Kitten Taxi. It’s ridiculous to my eyes. Go donate to charity instead.

Do you think Google should force developers to display their physical address? Does that seem fair?