IFA press events don’t kick off for at least a few more hours, but the leaks of official press images and specs are starting to flow. The folks over at Xperia Blog managed to grab press images of the new Sony Xperia Z3 in copper, along with a fitness or smartband that appears to have an e-ink display. Both products should be unveiled by Sony, which is hosting an event at 7AM Pacific, tomorrow.

The Xperia Z3 is largely thought to be a minor improvement over the Xperia Z2. The device’s specs are currently rumored to include a Snapdragon 801 clocked at 2.5GHz, 5.2-inch 1080p display, 3GB RAM, 20.7MP camera, 16GB internal storage, micro SD slot, and feature a body that is just 7.5mm thick. Sony may also toss in special sound enhancement in the form of Digital Sound Enhancement Engine. It’s no slouch, just not much of an improvement over the previous model.

As can be seen by the images in this post, the new Xperia flagship could come in black and white, but also in copper and a terrible looking green.

On a related note, the woman in the image below is wearing a smartband or fitness band of some sort with an e-ink display. E-ink displays, like the one used in the Pebble, allow devices to continually show information on a display while only sipping battery. Unlike the Gear Fit or other wearables with full color displays, there is a chance that this device could last for days without needing to be charged. The Xperia Blog is referring to this product as the Smartband Talk.

Should Sony finally release a flagship in a timely manner here in the States, would you consider the Xperia Z3? 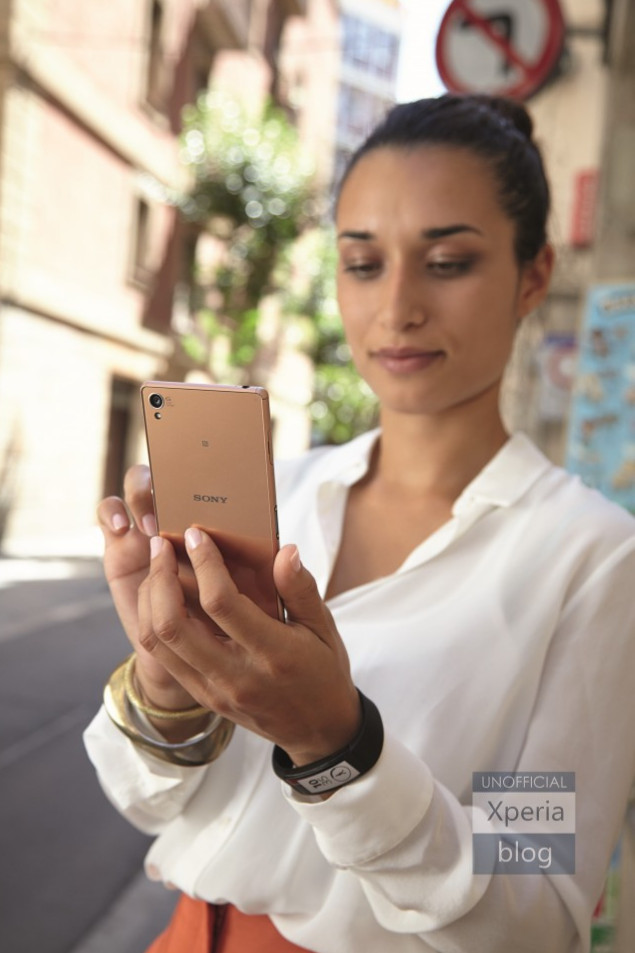