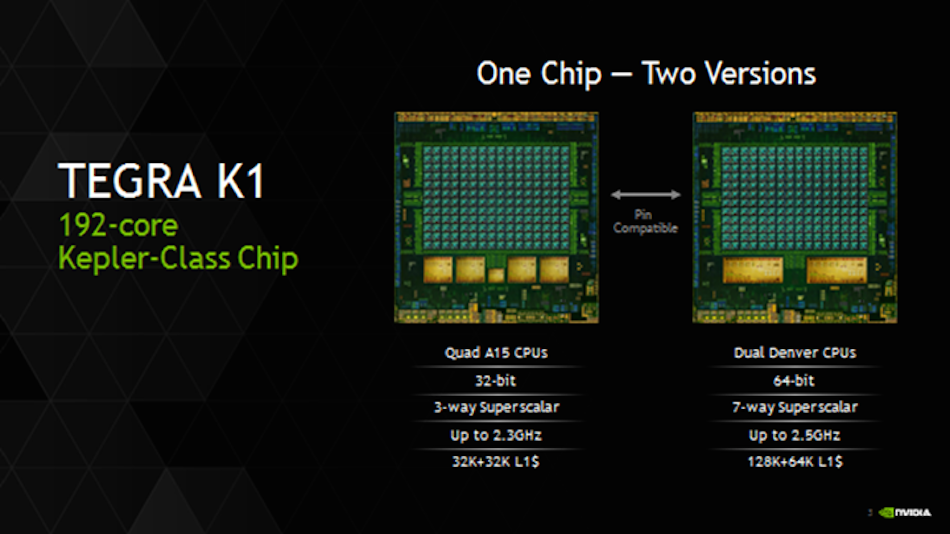 This afternoon, NVIDIA made more information regarding the 64-bit Tegra K1 processor known, showcasing this information during a technical conference on high-performance chips called HOT CHIPS, while also posting an informative blog post.

Back in January, NVIDIA announced the 32-bit Tegra K1, which now powers the SHIELD Tablet, but since then, bits of info has been made public regarding a 64-bit version of the processor. The 64-bit Tegra K1, as we now know thanks to NVIDIA, is a custom-designed, dual-core “Project Denver” CPU, which is fully ARMv8 architecture compatible. In addition, the 64-bit TK1 is pin compatible with the 32-bit Tegra K1 for “ease of implementation” and faster time to market.

Bringing what NVIDIA calls “exceptional performance and superior energy efficiency,” the 64-bit Tegra K1 is the world’s first 64-bit ARM processor for Android. While a few may be taken aback by its “dual-core” tag, don’t get held up on how many cores the chip features. As the company states, “the dual-CPU cores can attain significantly higher performance than existing four- to eight-core mobile CPUs on most mobile workloads.”

Unsurprisingly, NVIDIA quickly covers when folks might see this 64-bit chip hit the market, as the company is working closely with Android partners to bring devices to customers later this year that feature the new silicon. And for the “hardcore” Android users among us, NVIDIA states “we’re already developing the next version of Android – “L” – on the 64-bit Tegra K1.”