Not that this info greatly impacts most of us, but I found Verizon’s 2013 Transparency Report to be somewhat fascinating. In the report, released this morning, Verizon claims that they received over 320,000 law enforcement requests from federal, state or local authorities during the course of last year. According to their numbers, that was an increase as compared to 2012. Also, Verizon made sure to point out that they “do not release customer information unless authorized by law.”

Of the 320,000+ requests, 1,496 were wiretap orders, approximately 50,000 were emergency requests from law enforcement, 36,000 warrants, over 6,300 were trap & trace orders, and the majority (at over 164,000) were subpoenas. The “vast majority” of these were consumer related, with only a few regarding their enterprise customers.

Maybe it’s just me, but those numbers seem incredibly large. Then again, they do have almost 100 million postpaid subscribers.

Here is the breakdown: 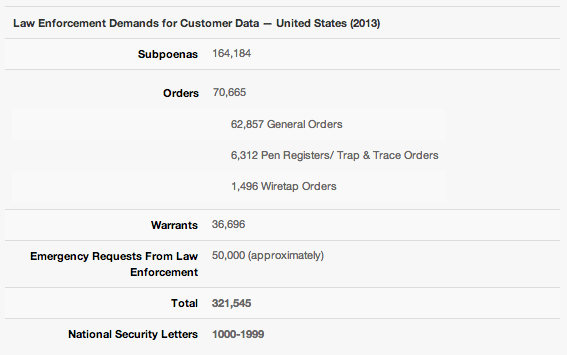 On an NSA note, Verizon can only say that they received between 1,000 and 2,000 National Security Letters because the NSA will only allow them to “provide a broad range.”

If you’d like to read further into each type of request, hit up the source link below.