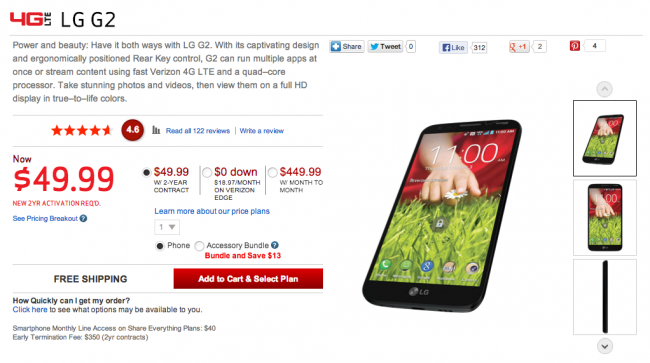 Update:  Forget Verizon for a minute, Amazon is listing the LG G2 as being $199 OFF-contract. Yes, that’s $199 for one of the best phones of the year without a contract. I’d imagine it’s a mistake, but hey, might be worth attempting to buy. (Edit:  AT&T Black G2 is $199 off-contract as well.)

Update 2: Amazon has corrected the pricing. If you got in on the deal, now we wait to see if anyone’s orders ship.

Update 3: Since the Amazon deal is dead, feel free to use coupon code “slick50” during checkout at Verizon to get the phone for free on-contract.

Update 4: Folks are pouring in saying that their devices are shipping from Amazon. That’s great to hear, and we are excited Amazon decided to honor these deals. If your order was canceled, feel free to call them and state the situation. Some are reporting that they are reinstating orders now.

Who here has a new device on its way?

If you thought yesterday’s Moto X price cut to $99 at Verizon was a good deal, take a look at the new LG G2 price. How does $49.99 on-contract sound for one of the year’s best phones? As you know, we reviewed the G2 and had very few negative things to say about it. It has a class-leading full HD display, powerful Snapdragon 800 processor, great mobile camera, amazing battery life, and all sorts of productivity tools that are actually useful. It’s easily LG’s best work yet, and is probably one of the reasons we were all so excited for the Nexus 5 to arrive, since it’s loosely based on the G2.

So the deal is, the LG G2 is $49.99 on-contract from today until November 11. Yes, you only have a few days to get in on this deal action. If you want to buy the phone off-contract, you are looking at $449, which if I’m being honest, is one hell of a deal as well. Most phones this good tend to retail at around $599.

Get to it, if you were looking for a new phone that is.