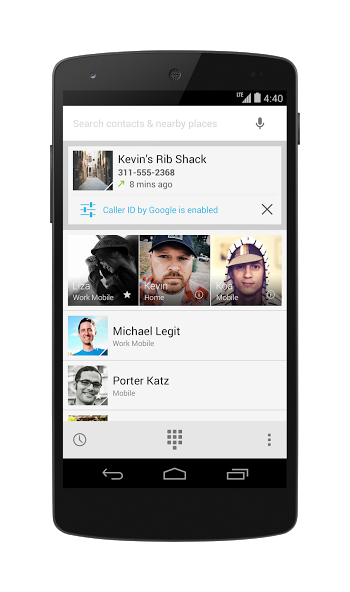 Back on November 4, but just now catching the attention of the Web, Google announced through its official Android Google+ page that the Smart Dialer featured in Android 4.4 will receive an update that would include the addition of Google+ profiles for those who have Discovery Mode enabled.

If you dial a number, it is then cross referenced through Google+, and if found, the attached account’s profile picture is then displayed through the dialer. It’s a way to help bring media to your device, that way you don’t have to look at boring blank contact images. Plus, Google is all about connecting friends.

Coming in early 2014, users who have verified their phone number and have discovery turned on will have their names and Google Profile photos display whenever they call you, or you call them (it’s great if a new friend who hasn’t been saved in your contacts yet calls you).

Google says this feature should show up in early 2014, which is right around the corner.

This sounds like a good idea to us. If we are buying into Google’s ecosystem, and they are holding onto everyone’s information, then it might as well be used to help out once in a while.

What are your thoughts?