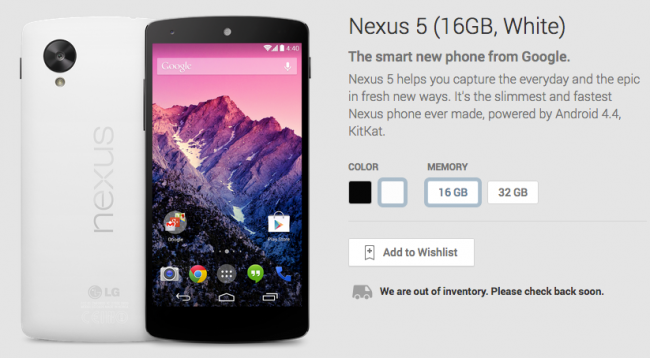 We are rolling up on 24 hours since the Nexus 5 hit Google Play, so we thought it might be a good idea to update everyone on what inventory is left if you were still planning on picking one up. As of right now, both the Black and White models in the 16GB memory option are sold out, but the 32GB models appear to still be hanging in there for purchase.

When they first hit Google Play, it was estimated that the devices would leave the warehouse within 1-2 days after purchase, but now they have dropped back to 2-3 weeks. Waiting sucks, but that’s what you have to do sometimes.

We ran a poll yesterday, and out of 7,000+ people, 41% of you said you had purchased a Nexus 5. That’s a solid number for a device that was only announced through a a few press releases and leaked for a few months straight.

Excited to get your hands on a Nexus 5?