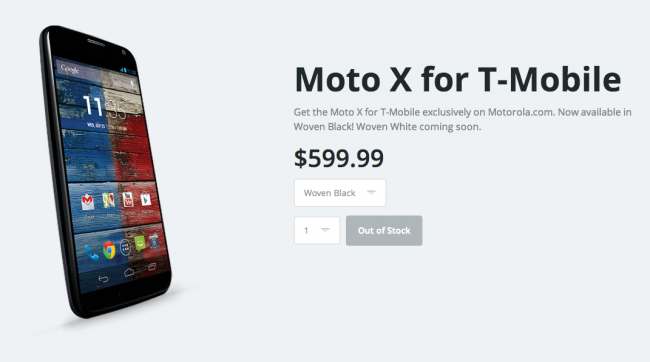 This morning, Motorola announced that it will begin selling the T-Mobile variant of the Moto X beginning today through Motorola.com. Once that happens, you’ll be able to purchase Motorola’s newest flagship from all of the major U.S. carriers, including Verizon, AT&T, Sprint, US Cellular, and T-Mo. The device will run $599 off-contract and have an unlockable bootloader.

At this point, the device in both black and white is still showing as “out of stock,” so that price could change to include some attachment to T-Mobile’s payment plans. That’s speculation on my part, meaning we’ll update this post as it goes live.

We still have no word on the developer editions, which we were told over two weeks ago would be arriving in “days.” We’ve reached out to Motorola on their status for clarification.