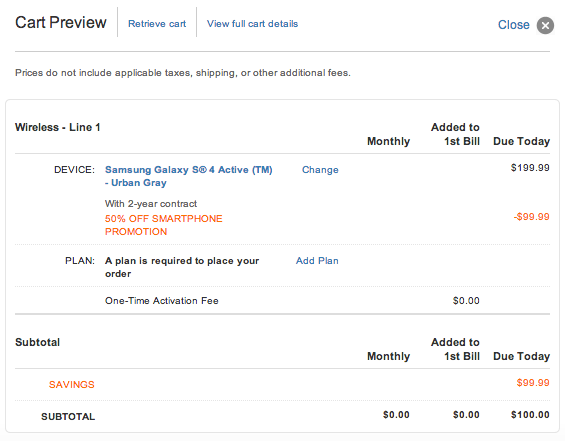 Up until June 30, AT&T is willing to slash half the price off of a new phone should you be interested in signing a new contract with the wireless carrier. In a new promo that went live this past weekend, AT&T is offering up 50% discounts to any phone available in their online shop , including the Samsung Galaxy S4 and HTC One (iPhone 5 too if you care). All you have to do is shop from their site, add the device to your cart, and then proceed to checkout where you will see the discount being applied. As you can tell from the image above, this even worked on the brand new Galaxy S4 Active.

Now, we’re not big fans of wireless contracts, but we also understand that a large majority of smartphone owners aren’t interested in forking out the $600+ it would cost to pay full retail and remain contract-free. Should contracts be something you are willing to accept, you have to admit that this is a hell of a deal.

Again, you have until June 30.