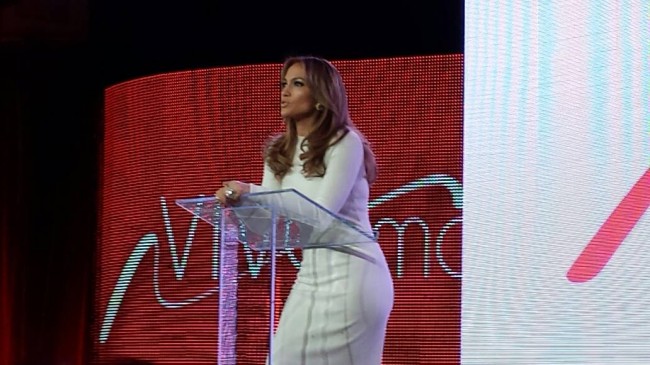 Sooooo, about that Verizon Wireless press event at CTIA. It was for a Latino-focused mobile network that Verizon has partnered with Jennifer Lopez to launch – it’s called Viva Movil. It was easily one of the more embarrassing and hilarious (for the wrong reasons) press events I have seen in my 3 or 4 years in this business. J-Lo stood on stage after a quick intro, not even hiding the fact that she was ill-prepared and had to turn her head from teleprompter to teleprompter during her drawn out speech over a company that she apparently cares so much for. There was even a moment where she lost track of a question she was attempting to answer, and instead took to explaining how fun it was to pick out colors and fonts for stores. Marni Walden, Verizon’s COO, probably made matters worse though, by starting off the event telling the press in attendance that they wouldn’t have invited them there unless it was for a “big announcement” and that they would have news to Tweet about afterwards. She wasn’t lying, there is plenty to Tweet about.

Viva Movil will have stores in New York, Miami, Los Angeles and a presence online. Verizon doesn’t actually own any part of the business, they are simply helping promote it and are a launch partner. Viva Movil will be branded as “premium” Verizon store, which is no different than any other third party wireless store you may have visited.

After cruising through their site for a moment, I noticed that they have a decent collection of phones that includes the Galaxy S3, iPhone 5 and RAZR MAXX HD. The minute and data plans are the same as Verizon’s, since everything runs on their network.

I don’t think I need to go into how awkward and confusing the idea of a Latino-focused wireless network is, do I? If you want to find out more, hit up the source link below.

Here are the two highlights from the event: