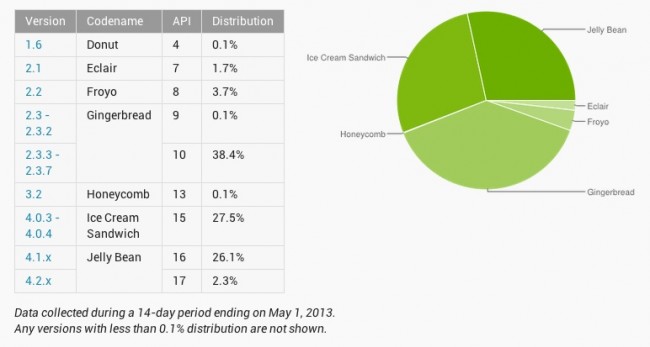 The Android team updated their OS distribution numbers for the beginning of May this afternoon, showing what appears to be a slight jump for Jelly Bean at 28.4%, which is up from the 25% it topped off at in the beginning of April. We’re seeing a decline in Ice Cream Sandwich’s piece of the pie, which is likely due to devices running Android 4.0+ jumping to Android 4.1+ over the last month. We have seen a number of Jelly Bean updates, after all.

Gingerbread dropped to 38.5%, Honeycomb is barely alive at 0.1%, Froyo dipped to 3.6%, and the rest of the numbers didn’t move for Eclair and Donut.

You can see April’s numbers here, if you’d like to compare. Keep in mind that this numbers are now built using data collected from each device when the user visits the Google Play Store