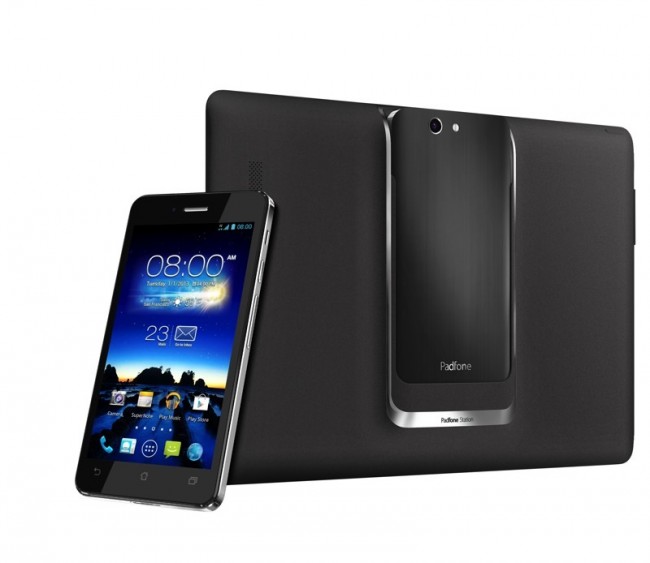 Asus is at it again with their phone-inside-of-a-tablet line of products called the Padfone. Announced this morning at Mobile World Congress, we have the brand new Padfone Infinity, a phone with a 5″ 1080p display, 1.7GHz Snapdragon 600 processor, 64GB storage, 13MP camera, LTE, and Android 4.2. But most importantly, it also docks into a tablet shell, just like its brothers and sisters did, to turn your phone into a 10.1″ tablet as an all-in-one type of device.

The device, to me, doesn’t seem a lot different than the Padfone 2 other than its 1080p display and upgraded processor. It still rocks LTE, docks gently into a shell, and likely will never come near a U.S. carrier.

The Padfone Infinity will go one sale in Taiwan in April, along with some other select countries in Q2. The U.S. is not mentioned at all, and that shouldn’t surprise you. Neither of the previous Padfone devices made their way to our shores, because carriers here like to charge you to connect tablets to their network. They also sure as hell don’t want you to tether for free (which is sort of what docking the device does) to a tablet and gobbling up data.

It’s too bad really, because the concept of the Padfone is brilliant.

“PadFone™ Infinity is the latest evolution of our PadFone™ line,” said Jonney Shih, ASUS Chairman. “It combines incredible design with an uncompromised user experience derived from our Design Thinking philosophy.”

The unique two-in-one nature of ASUS PadFone™ removes the tedious need to synchronize data between smartphone and tablet. Data and settings on PadFone™ Infinity are available instantly on PadFone™ Infinity Station upon docking, and running apps are smoothly reformatted to fit the larger display. Mobile data bills are also reduced, since a single data plan can be shared between both devices.

ASUS PadFone™ Infinity will be available in Taiwan from April and selected other countries from early Q2 2013. The combined price of PadFone Infinity 64GB and PadFone Infinity Station is €999 (MSRP). Exact pricing and specifications will vary by market. Please confirm full pricing and availability with your local ASUS representative.

WHERE TO FIND ASUS AT MWC

ASUS is a worldwide top-three consumer notebook vendor and maker of the world’s best-selling, most award-winning, motherboards. A leading enterprise in the new digital era, ASUS designs and manufactures products that perfectly meet the needs of today’s digital home and office, with a broad portfolio that includes motherboards, graphics cards, optical drives, displays, desktop and all-in-one PCs, notebooks, netbooks, servers, multimedia devices, wireless solutions, networking devices, tablets and smartphones. Driven by innovation and committed to quality, ASUS won 4,168 awards in 2012 and is widely credited with revolutionizing the PC industry with its Eee PC™. ASUS has more than 12,500 employees around the globe with a world-class R&D team of 3,800 engineers. Company revenue for 2011 was approximately US$11.9 billion.