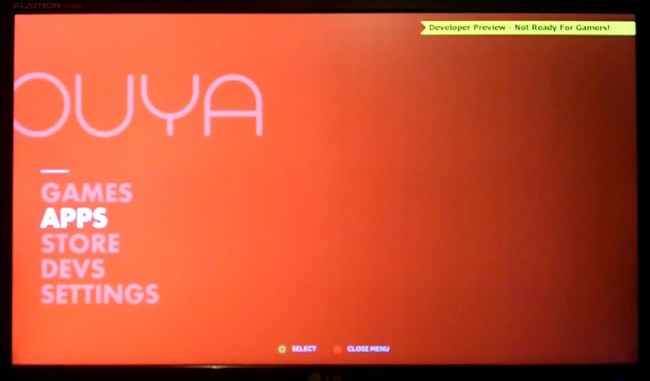 Now that developer units of the OUYA gaming console have started to arrive at the homes and offices of developers, it only makes sense that at least one would upload a full hands-on with the device. In this series of videos, by the developer of a game called Deadly Dungeons, we get a look at the UI of OUYA, how controllers perform, how settings can be setup, what Android looks like on the device, and get an idea as to how “beta” or “alpha” this early version is.

The first video of the “interface” is easily the most interesting that we have included below. The UI is on display, which even I’ll admit looks very nice. It desperately needs some polish, but the OUYA team has time to make that happen. As you’ll see through the 17-minute video, there are bits and pieces of Android that will look familiar, such as the WiFi screen and browser. One thing we’re confused about, is why they chose the phone UI of Android over the tablet UI. You’ll notice during his browser and YouTube test, that the device clearly thinks the device is a smartphone and not a tablet, something I hope they change.

As a reminder, these OUYA dev units do not come equipped with games, other than a test build of something and then whatever the developer wants to put on it. You do get to see gameplay of Deadly Dungeons, however, it’s a portrait-style game, so it looks a bit odd on a big screen.

This dev pointed out something that surprises us as well – the fact that the controller doesn’t have a Start, Select, or Menu button whatsoever. Since it’s running Android, this seems like a major oversight. As is noted during gameplay of his game, the dev shows that there is no way to exit or bring up a menu in his game, something he’ll have to code in to make it fully compatible with OUYA. That’s not necessarily a bad thing, but it something to think about.

Last, there is a section for “Store” where we assume the OUYA team will look to feature and sell games that they have partnered with. I’m not exactly sure how or if OUYA will ever get Google Play on this device, so at this point, I’m a bit skeptical as to how robust this system can be.

It’s definitely a development worth keeping an eye on.

Hooking the Beast Up: