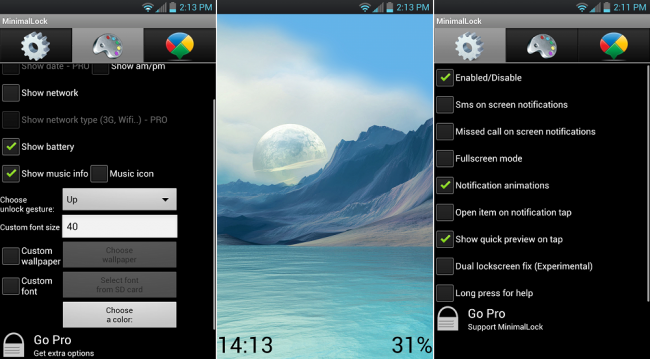 I won’t harp anymore on how we love minimal looks, because I’ve probably said it about a million times. Either way, we love it. But at which point does something become too minimal? Well, in my opinion, it could quite possibly be this lockscreen application called MinimalLock. Based solely on gestures and appliable shortcuts to message threads and music controls, this is one of the most minimalist lockscreens I’ve ever had installed.

Basically, once you install it, it’s a blank slate and a single swipe “up” unlocks the homescreen. From there, you can throw on the time, date, music controls, and more. For those looking for even more things to fill up their lockscreen, there is a Pro version which unlocks many different shortcuts like Gmail, Facebook, and a ton of other apps that will be able to turn that drag into fab. Did I really just say that?

If minimal is your thing, you know what to do.

P.S. I’m feeling a “Show Off Your Homescreen” day coming up. Wink wink.