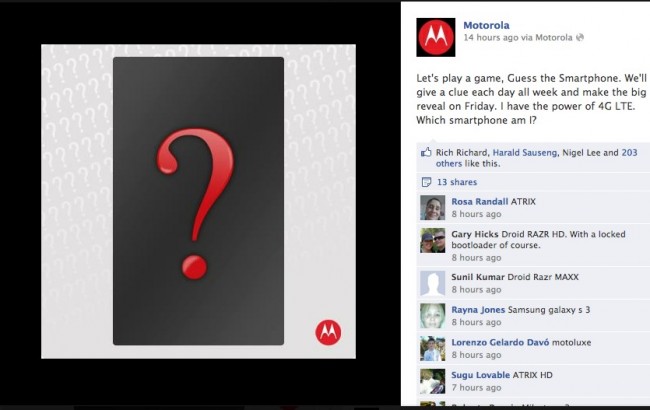 Late last night, Motorola posted the first clue of many that will lead up to the unveiling of a smartphone. According to a post on their Facebook page, they plan to give a new clue each day this week until the “big reveal on Friday.”

I guess you could also take this new “game” as something to get people to interact on Moto’s Facebook page, rather than them actually announcing a new phone. As in, they could give off clues for 5 days to a phone that has already been released (RAZR, RAZR MAXX, Photon Q, or Atrix HD), hoping that you stick around for 5 days to comment and “like” things on their page. We could get to Friday and the “big reveal” could be, “Great job, you guessed the Photon Q!”

Update:  Just as we speculated above, Motorola is not going to announce a new phone, but are simply playing a game. TechRadar was able to chat with a Moto spokesperson who said that this game is about “current” smartphones available, not a new one.

Again, a new clue will be dropped each day, so stay close to Moto’s Facebook page to find out.