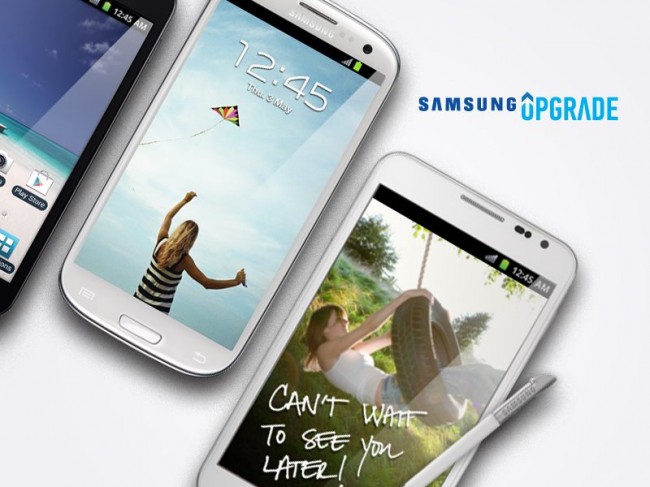 Since our poll yesterday showed that many of you have upgraded recently to the Verizon version of the Samsung Galaxy SIII you might be interested in this bit of news. Samsung took to their Facebook page to announce Samsung Upgrade, a service that will give you a few dollars for sending in your old phone that you may not be using anymore. As long as you have purchased, or plan on purchasing, a Galaxy SIII, a Galaxy Note or the still good Galaxy SII, Samsung will give you some cash for sticking with them.

The process does sound a little sketchy, after sending your phone in when you have your new device, Samsung will send you a check back in the mail for the quote that they gave you on the website. Nevertheless, if you have a phone sitting around unused this may entice you a bit. Here are a few numbers from phones that we know some of our readers have lying around:

Here’s where it gets interesting for people who have upgrade to the SIII lately. On the homepage of their application, it says “If you’ve already purchased a new Samsung smartphone, have the proof of purchase handy.” This sounds like Samsung is willing to work with people who have already adopted the SIII as their new phone.

We know that smartphones usually get handed down to the next generation after upgrades in this community, but if you have a few unused phones lying around and plan on upgrading, or have upgraded already: why not give it a look? Would you rather sell them to Samsung on or a site like Swappa.com?