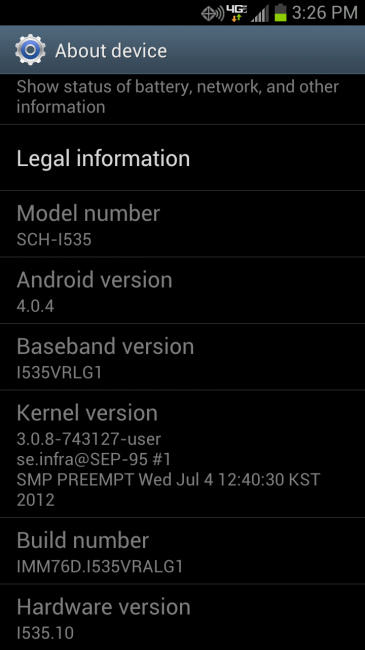 If you are having issues with your Samsung Galaxy S3 on Verizon, and take it in for a replacement, you will receive a unit that has been updated with new software I535VRLG1 (left screenshot). The update includes a new kernel, but more importantly, we are hearing that it dumbs down the search functionality of your phone, meaning it can only do internet searches going forward.

As you are all aware, Samsung is in a heated battle with Apple over on-device searches and has begun dumbing it down (no more contact, app, etc. searches) on the Galaxy S3 to avoid any import bans. We have already seen them do this on the AT&T and Sprint versions, but it appears as if Verizon’s is next.

We haven’t heard when this update will rollout to current Galaxy S3 owners that purchased theirs during launch week, but you have to assume that it will be soon. This latest shipment probably has the update to potentially avoid being banned. It’s an unfortunate situation.