We are a week removed from Google I/O 2012, can you believe it? A full week of Jelly Bean tips and tricks, Nexus 7 overviews, and Nexus Q confusion is officially behind us. So let’s talk about in this special edition Q&A session that focused on the magic that went down 9 days ago. We’ll talk about about those three items, but also a Nexus 10, if Train was any good in person, and when the rest of you will see the update to Android 4.1.

What’s up with the phone layout on the Nexus 7? Does Jelly Bean do away with the tablet layout that we see in Honeycomb and ICS?

K:  Google must have decided that a 7″ tablet functions better with a phone UI than a tablet UI, even though it is a tablet. I tend to like this move as the tablet UI for Android is still pretty lacking in my opinion. Going from your phone to the Nexus 7 is identical, just in a bigger sense. Our full review will be out early next week and we’ll touch on more of this. So far though, I don’t think anyone is going to have any major complaints over it. To answer the second question – no Jelly Bean does not do away with the tablet layout.

T:  The portrait layout is perfect for the 7″ display. Jelly Bean does not do away with the tablet layout you are used to seeing, but Google clearly knew that this layout simply looks and functions better for homescreen navigation on the Nexus 7.

Does the Q have any chance of being successful?

K:  I hooked mine up the minute I got home last weekend, used it for a few minutes, fired it up again the next day and haven’t touched it since (part of that absence could be blamed on the holiday week). While my music is all in Google Music, I have yet to fully buy into Google Movies and TV, and also do not consider myself to be a YouTube addict. The product is built well, but until they open it up to things like Pandora, Spotify, or other services that grab more users, I don’t know how this thing is going to appeal to many. It was a bold move by Google to fully step into the hardware game by essentially inventing a category.

R:  That depends on what you mean by successful. I don’t think Google planned on selling many Qs. I think the point was to get a device in the market that was made in America to try to keep that conversation going. Will it compete with Apple TV or even Google TV? No, but that’s not the point. The point is that we need to keep investing in American made products.

E:  The price HAS to come down. When I heard it being announced I said, “this is fantastic, as long as it’s under $100.” We all saw how that ended up, and I think at the price point now it directly conflicts with Google TV, so they’re going to have to do some soul searching to figure out how to make this work properly in the ecosystem.

Was Train as terrible Live as they sounded through the stream?

K:  Google kept the I/O party secret for the most part until the day of. We had no idea that it was going to be Train, but upon finding out, you can imagine that we all let out an “Ugh.” (Side note: Paul Oakenfold opened up the show.) At one point, they performed Journey’s “Don’t Stop Believing” and brought up an attractive blonde woman and some young 12-year old boy to help sing along. You got the feeling that this was clearly setup as both were on key, on point, and flawless with a live band behind them. It got creepy when the lead singer started hitting on the blonde, but then tried to deflect his off-handed comments back to the boy to try to make it less awkward. He failed. It was super awkward and creepy. Still, they were probably better than Jane’s Addiction was last year.

How long until Galaxy SIII gets updated to Jelly Bean? Other phones too?

K:  If only any of us knew the answer to that. The jump from ICS to Jelly Bean doesn’t seem to be massive, so these updates should happen faster than the jump from Gingerbread to ICS. That still doesn’t mean you are going to see Android 4.1 in the next month. The Galaxy Nexus (probably just the GSM version) will get it in a couple of weeks, but I wouldn’t be surprised if was September before any other phone sees the love.

R:  I imagine Jelly Bean will roll out to most devices that received or are scheduled to receive 4.0. No one can really guess accurately on the timing. Probably similar to the Froyo rollout on top of Éclair devices.

How do you see yourself using Google Now in your daily life and is it a real benefit?

E:  I use it everyday. I’ve actually replaced Weatherbug Pro (my longest running application to-date) with it and that’s how I check my weather. The search feature is fantastic for anything I need to know. You have to give it time to learn though. Right away it doesn’t seem all that exciting, but once the phone learns your home, your travel routes and your favorite sports teams, it’s actually very useful.

R:  Yes and yes. It is actually more of a personal assistant than Siri in that it organizes all of your data and keeps you aware of what’s coming up without you having to prompt it. More importantly, it has access to data that Apple doesn’t (and that’s something Apple will probably never pursue).

K:  I can’t get enough of Google Now. My calendar is full of all sorts of stuff (work appointments, parties, reservations, games, etc.) and Google Now reminds me when they are about to happen and then tells me how long it’ll take me to get to them. The other day, it flat out said, “It’s time to leave for your appt.” Whenever I’m out and about, it always has the time or distance to get back home at my fingertips, reminds me of Timbers games a day in advance , shows me live scores during the game, and of course, has the weather a button press away.

For someone who’s never owned a tablet before, would you highly recommend the Nexus 7 as their first ever tablet?

T:  Yes, I would. The Nexus 7 is powerful, sexy, and better yet, inexpensive. For a first time slate owner, it’s the perfect introductory device to the world of Android “tabletry.” Playing games, watching movies, and surfing the web is a real treat on a device like this. I would recommend to everybody.

E:  Yes. I’d recommend it over any other Android tablet out there right now. Why? Because it’s exactly what Google and Android stand for. It’s clean and smooth and is a great representation of an awesome OS. 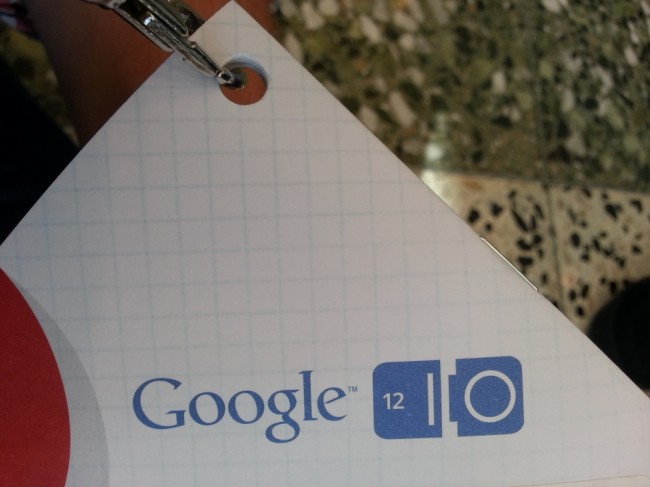 What are the biggest differences you saw between Google I/O and Apple’s WWDC?

K:  I didn’t hear Google mention a competitor even once. Apple spends half their presentations trying to trash and poke fun at others. Google has moved so far beyond that at this point. At WWDC we saw a company playing catch-up. At I/O, we saw a company pushing boundaries and exploring new territories.

R:  Google announces much, much more than Apple. In some ways that makes Google’s announcements more difficult to grasp because of information overload, but at the same time, the big announcements were easy to spot. Another thing I noticed is that I found Sergey much more compelling than Cook. Sergey seems genuinely excited about his projects while Cook seems proud of them. Both are good qualities in a CEO, but they create very different presentations.

Platform Developer Kit (PDK), will this actually speed up updates for a phone?

R:  Probably not. The software isn’t the only issue delaying updates (though it is a big one).

T:  In Google’s eyes it will. Fingers crossed that Verizon has their hands on it!

K:  I like the idea of the PDK. After announcing last year that a group of major players was being formed to streamline updates and then watching it fail miserably, this is the only move that Google could have done. Give OEMs early access to Android builds before they go public and it at least gives them an opportunity to start working on it. If they fail at pushing updates more quickly after having early access, that’s their own damn fault. Don’t forget though, that carriers are going to be the ultimate barrier here. Motorola can get Jelly Bean early, but they still have to push it through Verizon. Our headaches are not over, but it’s a step in the right direction.

Reflections on Google Glass? How many people pre-ordered?

T:  There was a constant line to pre-order Google Glasses. No idea on the numbers, but easily a thousand or more, maybe? Hard to tell. After that presentation, I think everyone in the world wants to get their hands on some of these. I am completely excited to see where that technology goes.

R:  Google Glass is going to be huge. It may not be a huge consumer device, but in different professional fields it could be a huge advantage (medical, armed forces, police, firemen, construction, architecture, surveying, etc.). I imagine it won’t make sense for consumers unless it’s connected to another device like a TV (watching a sports game and having no chrome around it, just the game with scores and other details on Glass).

E:  Depends on how well the 7 sells. Google and ASUS are already cutting the profit margains paper thin and banking on software sales to help cover those costs. Giving a tablet everything that Google Play has to offer is only beneficial if you use Google Play. If you want to see a Nexus 10, start buying movies and music and books through Play and support that ecosystem.

R:  I think so. The question is when and at what price point. The 7 is designed to take down the Fire, so I imagine the 10 will be released once Google feels confident in their ecosystem.

*All previous Q&A sessions can be found here.