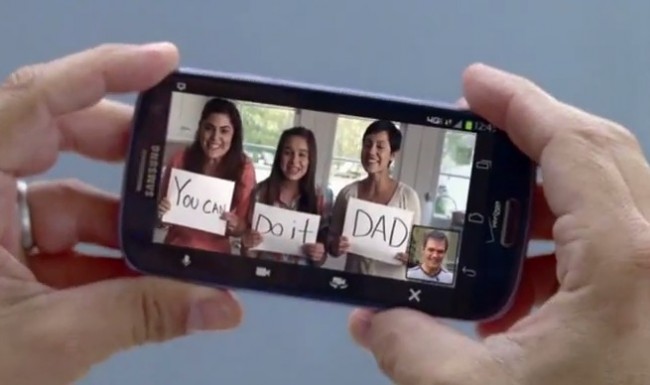 Verizon released a commercial last night called “Big Day” that takes you through the life of a man trying to get in shape before his daughter’s wedding. It’s a sweet little spot, however, the big thing that we all care about is the phone used. It’s Verizon’s Galaxy S3 that most have never seen before. Still expected to arrive around July 12, we need to talk about the one picture above as it is clearly not the actual device that you will be buying.

On-screen nav buttons from the Galaxy Nexus – really, Verizon? And what’s up with the “Verizon” logo squeezed into the space between the physical home button and the screen? For those that are worried about that actually showing up on retail units, I wouldn’t let it ruin your day. I would be surprised if that VZW logo isn’t there for commercial purposes and that’s it. You may recall that DROID RAZR MAXX camping commercial that went up a few weeks ago? The one where Big Red managed to toss in the entire “DROID RAZR MAXX” name into a tiny spot on the top-front of the device? Only for TV, folks.