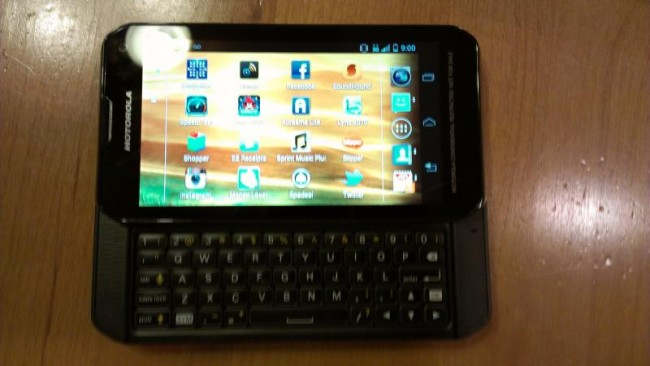 After Motorola release the DROID 4 at the beginning of the year, we were beginning to wonder if it would turn out to be one of the last Android phones on the planet to sport a physical keyboard. The answer to that is apparently, “No.” According to a family member of a Sprint device tester, the phone you are seeing above is real, works, and could become a reality. He was unable to provide any other details, but we can gather some things from this shot.

First of all, I’d put that screen at around 4 inches or so. You can see Ice Cream Sandwich in all its blue glory, along with a touch of MotoBlur. Those are definitely on-screen navigation keys, something that Motorola seems willing to push going forward with its next batch of phones. That’s a 5-row keyboard, similar to the one seen on the DROID 4. The design itself is a much more rounded D4, which we like. Other than that, we’d simply ask, “What do you think?”

At this point in the game, do you care at all for physical keyboards?