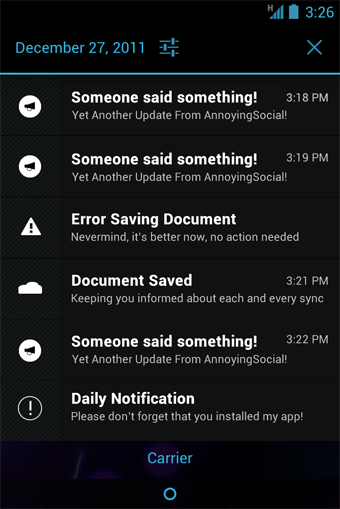 You hear a chime, see a pop up notification, and feel a buzz. Someone just sent you an email and your phone, computer, and tablet are notifying you. Despite all of our technology, notifications continue to oppress the senses of those who use multiple devices. Sure, it’s great that something like an email will disappear from your notifications once it has been read (thank you, ActiveSync), but that doesn’t stop things like chat notifications or calendar alerts.

To make matters worse, most of the innovation we’ve seen in notifications has been to make notifications more accessible, not devices more aware of the user. We’ve seen devices like the TouchPad and the Pre3 (may they rest in peace) promise to push notifications to each other, but at the end of the day notifications still appeared on both devices. At some point, clearing notifications becomes a new chore, making users feel like their devices are actually hindering them from getting things done.

The Motorola Lapdock, ASUS Padfone, and Ubuntu for Android try to solve this problem by making your Android phone fit into other form factors. It certainly solves the problem, but it restricts the number of devices you can use at the same time. For example, if your phone is also your tablet you couldn’t take a phone call very conveniently.

What users really want is for their devices to be aware of which of device they are using so that notifications appear there, not everywhere. The problem with this is not only deciding how to tell devices which one you’re using (should you have to tell it, simply creating another task to fulfill on every device or should it somehow detect your presence?), it’s also that user might have an Android phone, a Windows 8 tablet, and a MacBook. All of these ecosystems don’t work together, making controlling notifications even more of a difficult task for developers. Add in the complication of using different apps on different devices (TweetDeck in Chrome, Twitter for Android on your phone, and Plume on your Transformer Prime, for example) and syncing notifications between devices becomes even more of a nightmare.

Apple is trying to solve this problem by putting Notification Center in all iOS devices as well as OS X beginning in Mountain Lion. Apple’s implementation works but it faces the same problem of having notifications popping up on every device (and good luck hitting the tiny clear button on an iOS device in one try). More importantly, it works best if you only use iOS and OS X devices; in other words, for the vast majority of users this isn’t a solution.

There has been very little innovation in notifications. Every company seems to believe that all people want is to have every account on every device, but all that does is bombard users with notifications all over the place, many of which don’t sync with each other. Google has the opportunity to change that with truly innovative notifications that follow the user. These are the sorts of innovations that push an ecosystem and technology as a whole forward. I’d much rather see intellegent notifications before being able to check into Google+ from my glasses.