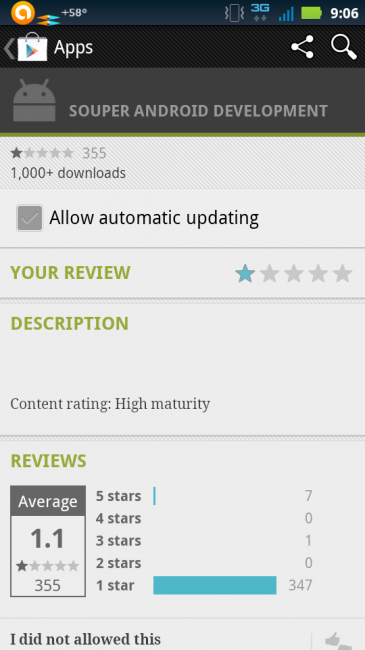 A number of our readers with DROID 3 phones (and one Incredible owner) along with various forums, are reporting that a mysterious app showed up as installed on their phones within the last day or two. At one point the app carried a person’s name, like “Brett Henderson” and “Timothy Milla,” but changed today to “Souper Android Development.” The troubling part of this story is that the app can not be uninstalled, doesn’t even show as an installed app, and no one can explain how it got there in the first place.

We aren’t sure at this time what exactly this app is capable of or if it is in fact malicious, but a name-changing, uninstallable app certainly shouldn’t excite you. Also, as you can tell from the screenshots, our tipster is rooted, so there is a chance this app made it’s way onto his phone by taking advantage of that. However, this seems to be widespread enough that it could have happened through other means and not just on rooted phones. We are still trying to find out if this app made its way onto non-rooted phones.

In potentially good news though, Google may have flexed their power to remove apps remotely from affected users’ phones. One of our tipsters finally sent over the Play link to this app (which in name references a Motorola Contacts app, aka a system app) and we noticed that it had been removed (or was never there?). So we then asked for him to check his installed apps to see if “Souper Android Development” remained and he confirmed that it is no longer on his phone or at least showing up as an installed app. Talk about confusing.

Update:  After reading more forum posts than any man should across the interwebs, many are suggesting that it could be just a Google Play error and is not anything to worry about. We will update this post should we hear anything back. For now, let’s not assume that this app is malicious. We have also tweaked the title of this post as to not alarm the hell out of everyone.

We have reached out to some contacts to see if we can get additional information.

In the mean time, be sure to drop us a line in the comments if you were or are still affected by this rogue app.

Cheers Audie, Andrew and everyone else!