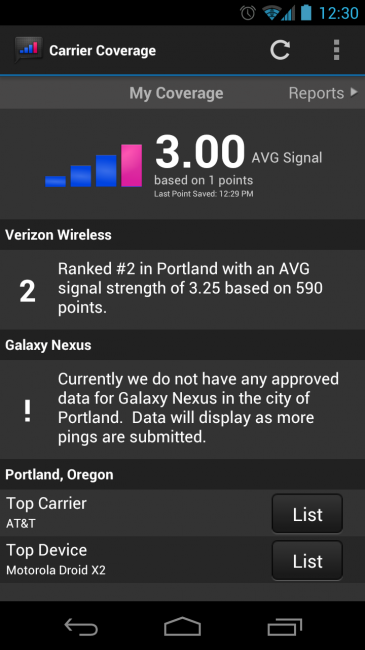 On Friday, a company called Carrier Coverage reached out to us with a new app that they referred to as being like Carrier-IQ, only it aims to help consumers rather than carriers. Using the term “Carrier-IQ” was an odd way of framing their position, but they had a snazzy video and what seemed like a decent enough idea that we gave it a look.

So what exactly is it? Carrier Coverage wants to have enough data to be able to tell you which carrier and phone is the best in the areas that you visit most frequently. Actually, it goes beyond that. Let’s say you plan to take a vacation or move into a new house – this app will eventually tell you if your particular carrier and phone will be able to perform at the level you need it to. By gathering data through their app (location, carrier, signal strength, and more), they should be able produce some useful info, assuming they get enough users.

How are they gathering data? They will obviously need access to some pretty important and private info. The good news is that they acknowledge that they understand the importance of security and allow you to choose whether or not you participate (find the options in Settings). They also let you choose how often your phone is pinged so that it isn’t a complete drain on your battery.

Rooted users.  If you are rooted, they have said that they can’t use your data (initially) as it may compromise their intent. That doesn’t mean you can’t still utilize the app and its benefits, it just means that they can’t use the info you send. Sort of makes sense.

Here are some additional features that they plan to introduce:

Sound interesting enough? I can definitely see the long-term benefits of an app like this, assuming that enough people decide that it’s secure and worth their time.