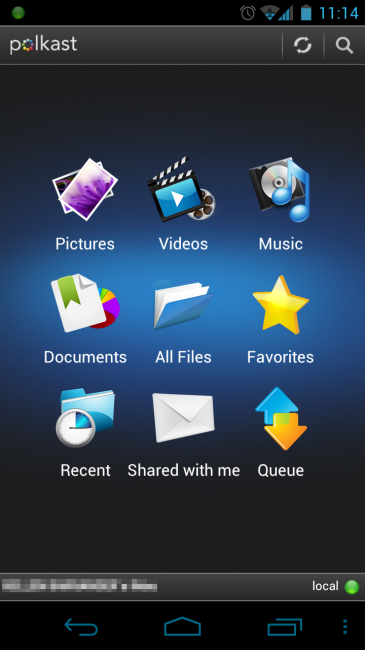 One of my favorite features that Motorola has built into their newest versions of Blur is MotoCast. As someone that is on the go a fair amount, yet still needs access to files stored on my home computers, it has come in handy more than a few times. Since I have mostly migrated to the Galaxy Nexus as my daily driver for now, I have been looking for a decent alternative. A reader may have found it for me in an app called Polkast.

The service acts almost identical to MotoCast in that it takes minutes to setup on each of your computers and is then instantly accessible on your phone over WiFi or data. It defaults to pulling in your music, pictures, videos and documents folders from your computer, but adding in additional locations is super easy. It also has this “recent” section that recognizes a handful of your most recently added computer files, just in case you need to access one immediately.

While there are a few tweaks that I would offer the developers (like the ability to turn off the constant notification or cloud music playing without having to download), I’m impressed for the most part. Oh yeah, it’s also free.