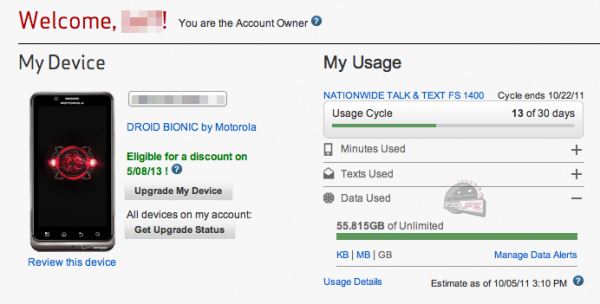 Verizon has made it clear that they want the majority of their new and current customers to have an enjoyable network experience throughout the life of their contract.  One of the ways they will make sure this happens is through what they are calling “Network Optimization Practices.”  It’s a form of temporary throttling that only happens once a customer meets a full list of requirements.  Well folks, one of our readers may have checked off all of the boxes on that list and then some.  Because as you know, these practices were not supposed to apply to 4G LTE customers.

As you can see from the shot of his account, he has busted through almost 60GB of data in 13 days. Take a minute to digest that number and then let’s continue.  So what happened?  During peak hours, he is most definitely seeing his data connection drop to “slower than 3G.”  In fact, during times when network use is high, he is apparently only able to browse the web if he toggles down to a 3G connection.

Now, I’ll even admit that seeing someone use 60GB of data (none of which was tethering) in such a short amount of time is leaving me speechless, but Verizon’s own disclosure on their data practices specifically say that “if you have a 4G LTE device you will not be impacted.”  So why is our reader getting throttled?

He was told over the phone that his excessive downloading was an “abuse of the network.”  That “abuse” apparently led to VZW making an exception to their own rules.

Update:  Another of our readers (@IsamarChajon) is reporting in that he has done 120GB in 10 days and has not been capped or throttled at all.  Could be that our original 60GB reader is just extremely unlucky. Here is his 120GB proof. Damn that is a lot of data.

*Note – on a positive note, he’s giving away his Bionic over at RootzWiki to a developer.  If you are a dev and interested, head on over to this post.