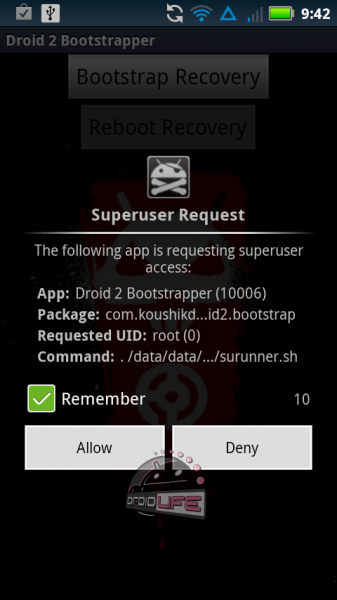 What exactly should happen if you were to root your phone, play around with ROMs/hacks/etc., somehow manage to break it, and then send it in to Verizon for a warranty replacement?  Should you be allowed to get a replacement or not?  According to reports, you can get a replacement, but the rooting of your phone voids any warranty you had and gives Verizon permission to charge you for a new one if they determine that your broken phone was tampered with.

Our buddy @P3droid has apparently heard from a couple of friends who have run into the scenario that we described above and then been slapped with a pretty hefty and unannounced bill.  Fair or unfair?

I’ll just say this – we’ve known that rooting your device voids your warranty since well back in the original DROID days, so it makes sense that Verizon would do this.  As unpopular as this may sound, I can’t fault Big Red for going this route.  If you decide to take your phone out of its original factory status, tinker with its guts, and break something, it shouldn’t be their responsibility to take care of you.

With that said though, a broken volume rocker, faulty screen, etc. has nothing do with rooting, so I’d hate to see someone get charged for something that they didn’t cause even if they decided to root.  It’s an interesting topic, and one that I would love to hear all your opinions on.

Update:  Our friends at Verizon saw this post and wanted to reach out to clarify everything immediately.  First up, is the fact that their policy says absolutely nothing about checking for root on devices.  When a phone is received, a phone is checked for three things and that definitely isn’t one of them.  They check to see if the box that the device was sent in is damaged, if the outside of the phone looks awful, and if it powers on – satisfy all of those and they move on to the next phone.  So basically, these reports of being charged for a rooted phone simply mean that these people were sending in garbage phone with defects.