After digging through the back end of Motorola’s website, a site redesign was discovered along with a number of never-before-seen or heard-of devices including the XOOM 2.  Embedded into the images of this new Moto site we are seeing what appear to be codenames of Zaha, Slimline, Pearl, and Tracy XL.  The same images for each phone are used over and over again though, so we’re really not sure if these are fake, Moto screwing with all of us, or early renders.  We’re hoping that at least a couple make it to market though, as the designs are something we haven’t seen before.

So basically what we can gather is the Slimline is Moto’s attempt at competing with the Galaxy S2 or LG Optimus Black on the thickness meter.  It appears to have taken a new approach to their now-famous camera hump, sports a shiny new grey back cover, and huge camera encasing.  It has that squared off look of a tablet or DROIDX which you know we’re big fans of.

The Zaha on the other hand has taken on some sort of futuristic disk design and at this angle at least, is not super appealing.  The screen does look oversized, but until we see more, will not be waiting impatiently for this one to arrive.

The Tracy XL is a watch.  We’re not sure what all it can do, but are thinking it’ll at least run Android.  There are no real details involved, and with these shoddy screenshots, all we can see are different color variations and a mention of Dick Tracy.

The XOOM 2 is probably what you really care about though, right?  Again, thanks to the blurrified images, all we can see is the name and what appears to be a silver rim around the outside of the device.  The upper edge of it looks much thinner than the original XOOM though, so we can hold out hope that Moto addressed the obvious design flaws on its first take.

What do you guys think?  Are these just place holders?  Any of them look appealing? 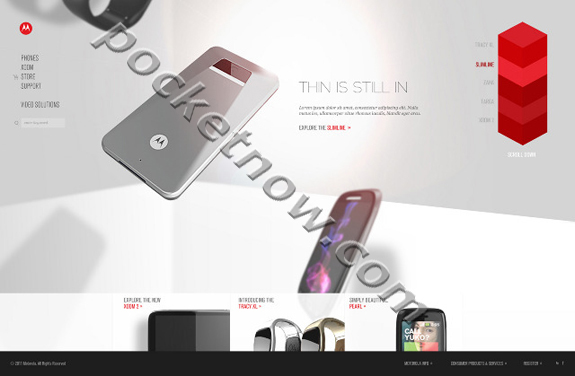