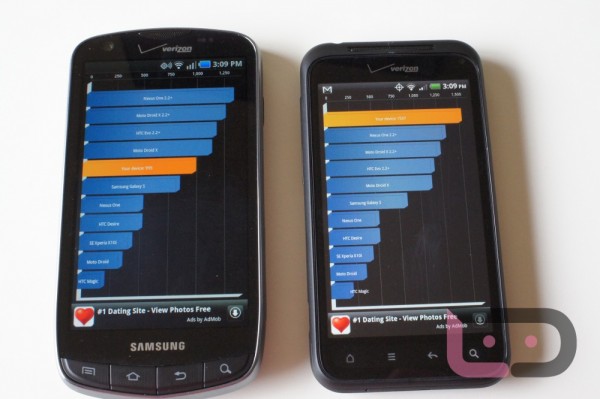 DROID Charge on the left, Incredible 2 on the right.  Did you just say, “Yikes!”?  Don’t worry, I did too when I first ran them.  And then to be fair, I kept running Quadrant over and over again on the Charge hoping that it would improve.  It didn’t.

Now, we all know that Quadrant isn’t the most consistent or realistic of all benchmark apps, but at least it’s something.  It does give us a pretty good idea of where a device stands when compared to another and in this situation, the Incredible 2 is the victor.

*Note – As many have already pointed out in the comments, the low scores from the Charge have to do with its garbage RFS file system which we were hoping they would have done away with by now.  I guess we know the answer to that.