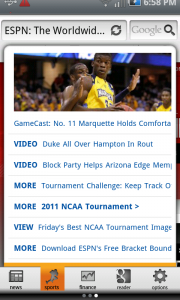 A new Skyfire (version 4.0) will be introduced today and includes a boatload of new features to make this a truly all-in-one browser experience.  In this latest update, users will notice a customizable “Skybar” with new Groupon, Twitter, Sports, News, Finance and Google Reader integration to go along with Facebook, Like, and Video options.

The biggest news here is the fact that Skyfire will be asking $2.99 for their video optimization feature going forward.  Before you freak out though, they’ve informed us that their current 3 million users will all be grandfathered in and will not have to pay the one-time fee.  Also, they are offering all Verizon customers the chance to get the fully featured Skyfire for free for a limited amount of time.  You can find it in the VZW section of the Android Market.

MOUNTAIN VIEW, Calif. (April 21st, 2011) – Today Skyfire, maker of the award-winning and popular mobile browser, announces the release of Skyfire 4.0 for Android — its highly anticipated next-generation Android browser. Skyfire 4.0 for Android allows users to personalize their SkyBarTM toolbar, while adding eight new SkyBar features. While the basic browser and toolbar will remain free to Android users, Skyfire is also introducing a premium in-app purchase to enable its Video feature, which draws on Skyfire’s cloud-based servers to optimize videos from across the web.  As a thank you to over 3 million early beta users of the app, all existing users will be “grandfathered” in for free access for the lifetime of their device.

Skyfire’s SkyBar toolbar is now scrollable and customizable, allowing for a larger and more personalized number of features to be positioned on the toolbar. Beyond the‘Video’, ‘Facebook’, ‘Fireplace’, ‘Popular’, ‘Ideas’ & ‘Like’ buttons, Skyfire has added full Twitter, Groupon and Google Reader integration, a ‘Share’ button, Sports, News and Finance feeds, and a ‘Settings’ button.

Skyfire for Android is one of the most popular applications in the Android Market and has seen over 3 million downloads since launching in April 2010. The mobile browser was upgraded to critical acclaim in November 2010 with integrated social media and Facebook capabilities, and the app currently has a user rating of 4.5 stars out of a possible five stars, based on tens of thousands of reviews in the Android Market. This latest update will continue to build on Skyfire’s strong track record of innovation.

With v4.0, Skyfire for Android will begin offering its video optimization as an optional $2.99 premium feature, unlocked via an in-app purchase after a three day free trial. The feature pays for itself for most users around the world by allowing users to watch more video with less data usage (where users have capped or metered data plans), as well as increasing battery life.

As part of a special, limited time offer, Skyfire is offering the video optimization feature free to all Verizon customers downloading Skyfire 4.0 for Android.  Skyfire will be available in the VCastTM Apps section of the Android Market for Verizon users during this promotion.

Skyfire 4.0 for Android, including the video optimization feature, will remain free for all of the over 3 million beta testers around the globe who have used the app to date, in gratitude for their support in helping Skyfire grow and improve.

“With Skyfire 4.0 for Android, we’re enabling users to customize their browser toolbar to fit their interests, from sports, to social networks, to finance, news, and local deals,” said Jeff Glueck, CEO of Skyfire. “While the basic browser will remain free, with the launch of Google’s Android In-App purchase platform, the time has come to make our video cloud acceleration service a premium feature that reflects the investment we make to support each user in our cloud.  We deliver state-of-the art web video tuned to your current mobile connection bandwidth, saving 75% on average data loads. For users who enjoy web video, or who are on metered data, the service can pay for itself in the first month of use.

New Features in Skyfire 4.0 for Android include:

o   Groupon – With the ‘Groupon’ Button, the SkyBar is now delivering nearby deals so you can do a quick check on the deal of the day at all times.

o   Settings – The ‘Settings’ button could easily be labeled the ‘Customize’ button.  Use this to enable, disable or position SkyBar features to your personal preferences.

Skyfire is dedicated to using cloud computing to improve multimedia experiences on mobile phones, and has created the first “Compression as a Service” (CAAS) offering for wireless carriers and device makers.  Skyfire’s technology has been visible to consumers through the Skyfire browser app, which has enabled Skyfire to refine its technology with millions of users.

The app was named the #2 App of All-Time for Android by TechCrunch, and was the top pick in a PC World September 2010 comparison of all Android browsers. Skyfire won the Best Mobile Application-People’s Voice at the 2009 Webby Awards and was named a Top App of 2009 by the New York Times’ Gadgetwise. Skyfire’s iPhone browser, launched in November 2010, quickly reached the top selling app rank on the Apple App StoreSM, as the first way for iOS users to access videos designed for the Adobe Flash PlayerTM. Skyfire was recently recognized by Light Reading as the #4 StartUp to watch in 2011.

Skyfire is based in Mountain View, California, in the heart of Silicon Valley.  For more information, visit www.skyfire.com, www.facebook.com/getskyfire.android or follow Skyfire on Twitter at twitter.com/skyfire.