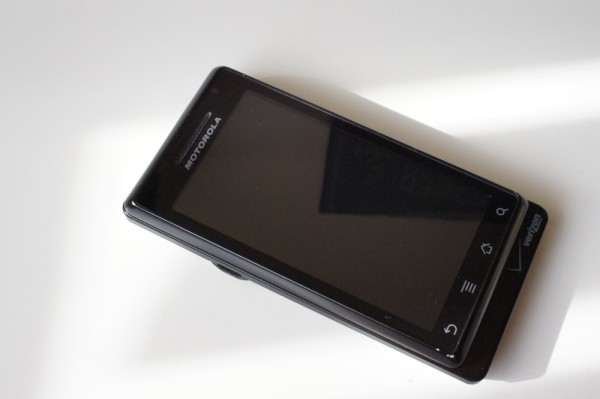 Last Thursday, Wired put out an article that walked through the story of how Android has exploded onto the mobile scene.  It talked Andy Rubin and the endless battles with Steve Jobs and Apple, but what really stood out to us, was the section that focused solely on the original Motorola DROID.  Is it possible for a single device to save three major corporations?  Just ask Motorola, Verizon, and Android that question and you might find a common answer.

With all three companies struggling to come up with anything that could compete against the iPhone in 2009, they joined forces to create what folks around this blog consider the greatest phone of all time.  As you’ll see in the piece below, the phone with its sharp and rugged look, was not an instant hit with CEOs who were expecting it to bring them back from the grave.  But with an impressive marketing campaign that focused on what the phone “does” as compared to its competitor, it was an instant hit that helped propel this mobile operating system that we love to incredible heights.  It’s a fantastic read.

Here is an excerpt from Wired’s piece:

Fortunately for Rubin, Sanjay Jha was in just as dire a position. Jha, the new co-CEO of Motorola, had been talking to Rubin for months, hoping to persuade him to let Motorola build the next Android phone. Once the dominant mobile device maker in the world, Motorola hadn’t had a major success since the Razr—in 2004. Jha had been hired in August 2008 to resurrect Motorola’s handset business, and he had pursued an all-or-nothing strategy, laying off thousands and betting Motorola’s future on his ability to build a hit Android phone.

Now Jha had come to Google headquarters to unveil his design—and it was impressive. Jha promised a device that would be far faster than any other smartphone. He said its touchscreen would have a higher resolution than the iPhone. He said it would come with a full keyboard, for customers who didn’t like the iPhone’s virtual keys. He promised a phone that was thin and sleek, one that could compete with the iPhone on pure aesthetics. And, thanks to his longstanding relationship with Verizon, he offered the potential of a partnership with the country’s then second-largest wireless carrier; in fact, Motorola and Verizon had already discussed building a smartphone together. “We were all kind of jazzed,” says Hiroshi Lockheimer, one of Rubin’s chief lieutenants, who was at the meeting. “I think we said OK on the spot.”

But that optimism faded a few months later, in the spring of 2009, when the first prototype arrived in the Android offices. To Rubin’s eyes, they looked nothing like the designs Jha had presented. Indeed, they were hideous. Yes, there is always a gap between a manufacturer’s sketches and the eventual prototype, but Rubin and his team had so much faith in Jha that they expected him to deliver a phone much closer to the one he had pitched. Despair set in. “It looked like a weapon. It was so sharp and jagged and full of hard lines. It looked like you could cut yourself on the edges,” says someone who saw the prototype. “We were really concerned. There were a lot of conversations where we asked, ‘Is this really the device we want to do? Should we try to talk Motorola out of it?’”

The implications of canceling the project were huge. Another dud, right on the heels of the disappointing G1, might cement the public’s perception of Android as a flop. Executives at Verizon, who had agreed to serve as the phone’s exclusive carrier, would look inept. They were still taking heat for passing on the iPhone. Apple had gone to AT&T instead, signing an exclusive deal and bringing the carrier millions of new customers. And a failure would likely mean the end of Motorola, the company that invented the cell phone. “There was a lot riding on it,” Rubin says. “I was betting my career on it.”

A sense of doom pervaded the whole summer. Google engineers worried the phone wouldn’t sell but still found themselves working weekends and holidays to develop the software. Jha spoke almost every day with John Stratton, Verizon Communications’ chief marketing officer at the time, trying to figure out a way to tweak the design without having to reengineer all the electronic components. Meanwhile, they were facing a November deadline.

And the phone still didn’t have a name. McCann, Verizon’s longtime ad agency, had come up with a list of possibilities—including Dynamite—that few liked. As late as Labor Day, the phone still went by its codename, Shoals. Feeling cornered, Stratton reached out to McGarry Bowen, a young ad agency known for its unconventional approach. “We told them they had a week,” said someone who was involved in the discussions. “A few days later, cofounder Gordon Bowen comes back and says, ‘What do you think when I say Droid?”

In retrospect, what the agency had done was simple: It turned the phone’s menacing looks into its biggest asset by marketing it as an anti-iPhone. The iPhone was smooth and refined, so they would pitch the Droid as rough and ready for work. The iPhone’s electronics and software were inaccessible, so they’d market the phone’s hackability. “If there had been a phone in the movie Black Hawk Down, it would have looked like the Droid,” Bowen told the executives.

A few weeks later, in early October 2009, Verizon and its new agency presented the Droid campaign to a group of 200 Android staffers. One ad featured stealth bombers dropping phones on a farm, in the woods, and by the side of a road. Another attacked the iPhone as a “digitally clueless beauty pageant queen.” A third listed all the things the Droid could do that the iPhone couldn’t. When they were over, the room erupted in applause. The Android team had been demoralized, but “when they decided they were going to do this full-on attack on the iPhone—that we were going to war—we got really excited,” says an Android employee.

Apparently you didn’t have to work at Google to love the campaign. When the Droid launched, on schedule, it was a tremendous hit, outpacing sales of the original iPhone in its first three months. Motorola started to make an amazing turnaround; today, thanks to the Droid, it is profitable again. Verizon started winning more new subscribers. It also improved its bargaining position with Apple. Less than two years later, when the two companies introduced the Verizon iPhone, the carrier managed to get a better deal from Apple than AT&T had.

Most important, the Droid halted Apple’s march toward smartphone dominance. In fact, it is by some measures outpacing its rival, powering 23 percent of all smartphones worldwide in 2010—more recent estimates are even higher—compared with the iPhone’s 16 percent. (Symbian still accounted for 38 percent of smartphones, on average, in 2010, while the BlackBerry OS accounted for 16 percent, but both were trending sharply downward.) Users activate more than 300,000 new Android devices every day; by comparison, as of October, combined iPhone, iPad, and iPod touch sales accounted for about 275,000 daily activations. Even Steve Jobs seems rattled; last October, he dropped in on an investors’ phone call to deliver a rant on what he sees as Android’s flaws.

I highly recommend you cruise over to Wired and finish off the entire article.

And not to get all emotional on you all, but this definitely hit home for me.  This blog was founded on the original “OG” DROID, so to finally hear the story behind it brings a smile to face and maybe even a couple of tears of joy.  We wouldn’t have an amazing community like this to hang out with everyday if this phone had not have been such a smashing success.  Good stuff.