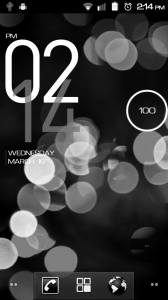 One of the hottest minimalist clocks to come out of XDA over the last month was the BobClockD3, which Matt wrote about here.  There was really only one downside; you were unable to customize it to fit your own color scheme and instead had to install and uninstall the different varieties that were submitted.  Those times are now over.  An update has been released, and you are can now pick the color and transparency of each number, giving you full control over this fantastic clock.

Uninstall old version.  Install this version as you would any other apk.