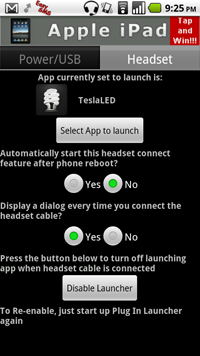 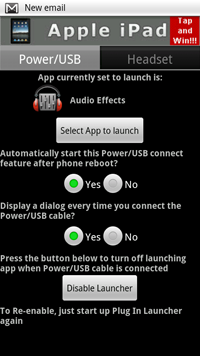 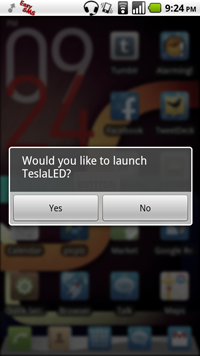 Many of us have gone through the stress of disabling the bug where Android will automatically launch a music player when headphones are inserted. For me, it’s been especially frustrating to hear the same songs from A Tribe Called Quest’s “Midnight Marauders” in some form of another on repeat.

So, naturally, one of the first things I used Titanium Backup for was to remove the Music.apk as a whole. However, what if you wanted to merely control the auto-launch better, instead of disabling it outright?

I ran across Plug In Launcher, which gives you that control. It’s a very simple app; users are able to assign an application to launch when one of two events happen: when someone plugs something into the headphone jack, or when its plugged into a powered USB port. It doesn’t pre-empt the Music.apk bug, though, so you’ll have to remove it yourself.

And it does what it advertises well; I haven’t had any trouble getting it to work in the least. However, what I have had some trouble with is figuring out what to launch. I mean, I don’t really have anything that depends on constant phone-to-computer sync, as most of my services (EasySMS, Android Remote Notifier) work when my phone auto-connects to my home wifi. However, this might be useful for something like PDANet, and for those who tether often.

Included is the option to have a dialog pop up, which is incredibly useful; sometimes you just want your headphones in to listen to YouTube, and you might not need to tether every time you plug in. Definitely worthwhile.

This isn’t one of those apps that I can really go in-depth about, but I feel that everyone should have it in their toolkit. It adds some customization that Android is famous for, and makes certain actions a breeze. The question remains, though: what would you launch?

Plug In Launcher is a free download.
—
Matt Demers is Droid Life’s app guy, and he’s just happy that he doesn’t have to mute “Steve Biko (Stir it Up)” in frustration anymore. You can reach him on Twitter or by e-mail; you can also check out his horrible music taste here.