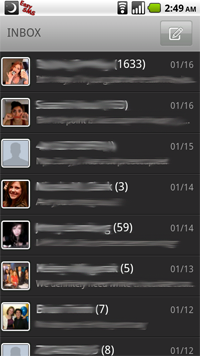 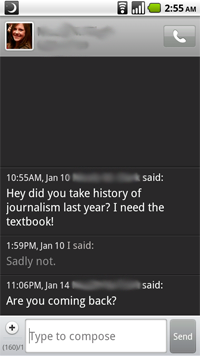 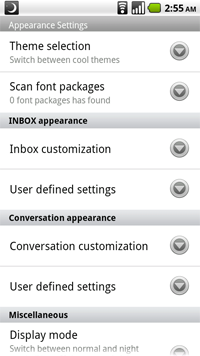 Like many other Android users, I’ve taken the leap and changed from our default SMS application to the popular alternative, Handcent SMS. With it came a wealth of customization options; all in all, it offered a similar, but deeper experience to the default messaging app.

However, while doing research for my upcoming review of GO Launcher, I found the developers (aptly titled “The GO Development Team”) have an SMS app of their own. Eager to keep my apps matching, I installed it, hoping that it would impress me as their launcher had.

GO’s entry into the SMS app world gave me the impression that they examined what made Handcent great and then tried to replicate it. That’s not to say it wasn’t successful in doing so, but at the same time, I felt almost like I was using a retreading of what I had come to enjoy. The customization options are on par with Handcent’s, and the pop-up notifications are nearly identical: not in the “it’s plagiarized” sense, but in a way that does its job well.

I was able to replicate the skin that I enjoyed using  previously except for the inclusion of contact pictures on every line: this annoyed me a little. Some searching yielded the discovery that not all features are available across all skins, which added to my frustration. Topping it off was the marketplace mechanic of having each individual skin listed as its own downloadable app, but that’s more a flaw of the marketplace as a system than a fault of the developers.

In short, GO SMS is a healthy alternative to Handcent SMS, but doesn’t really provide me any incentive to use it over its competitor. Handcent does all the things that GO does while having the features that I enjoy. I hate to have such small things as contact pictures or a customizable LED color (edit: which I’m told GO does end up having, albeit per contact. Thanks) be the tipping point of whether I use an app or not, but in the case of two things that perform such a similar function, it makes all the difference. Also something to consider is the larger development community around Handcent SMS: the population of skins is much greater.

I recommend using GO SMS if you have a vendetta towards the Handcent SMS developers, or are looking for an alternative for some other reason. It does all the things Handcent does minus a few low-key features – however, if you’ve come to get used to those features, you’ll notice their absence like a flashing red siren. 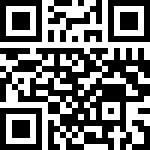 —
I’m Matt Demers, a Toronto writer who reviews apps for Droid Life. If you have any suggestions for things I should take a look at, you can message me on Twitter or at my shiny new Droid Life e-mail.