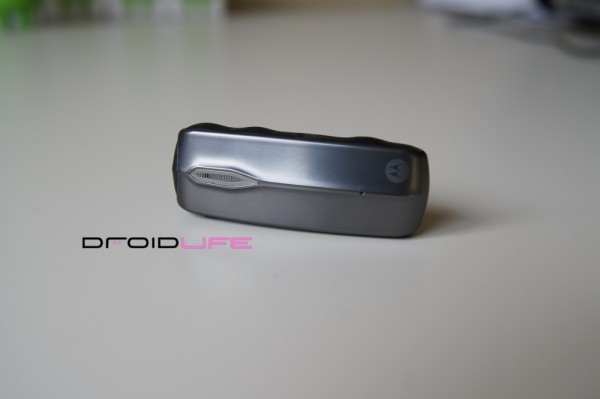 I have to admit that when I first received a Command One bluetooth headset, I was really more interested in the idea that I could give one away to readers than actually reviewing it.  And then I pulled it out of its cute little package, charged it, and used it.  Talk about a solid bluetooth, and one that is easily the best I’ve ever used.  While I haven’t used a ton because I refuse to be “that guy” with the ear piece in, cruising the grocery store, the Command One definitely impressed me.

Aside from the fact that it photos beautifully (as you’ll see below in the gallery), it comes packed with some fun-filled features and an app that takes it to another level.  (OK, that sounded a little over-the-top, but that’s what happens when you you get into review mode.)  We’re talking about MotoSpeak, which is available for free in the market and is an app that allows you to listen and reply to text messages without ever touching your phone.  As with any speech-to-text apparatus, you have to speak slowly, but in my time with it, there were no issues.  It should be noted that MotoSpeak doesn’t work with just any bluetooth headset, only select elite-level versions.

You get about 3.5 hours of talk time and can answer or ignore calls using voice commands.  The Command One also has your standard redial, mute/unmute, end call, answer second call options using its “call” button, but what really impressed me was the fact that it streams music.  Yep, it has multimedia capabilities that your basic bluetooth doesn’t and that’s where this device wins.  While it’s not Beats by Dre quality, it’s still an option that makes this a winner.

And of course, it also comes with 5 ear pierces, a micro-USB charger, and instruction booklet.  For those of you in the market for a new bluetooth thingy, I suggest you give the Command One a look.