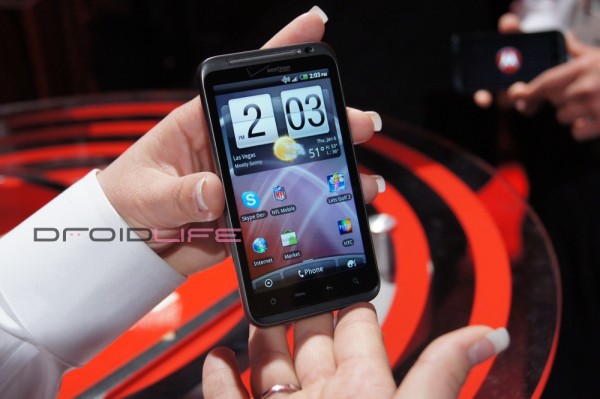 The press release for the HTC Thunderbolt is out and the specs are in.  We’re looking at a 1GHz Snapdragon processor, 4.3″ Super LCD screen, new Sense 2.0, 32GB pre-installed SD card, kickstand and 720p video recording.  In even better news, it’s definitely a Google device which you’ll see from the Google branding on that fancy little kickstand.  This is the same device we released 12 pictures of over a week ago.  It’s a fantastic device and we should have some longer hands-on time with it soon.

Gallery and press release after the break.

Taking advantage of Verizon Wireless’ 4G LTE network and the intuitiveness of the HTC Sense user experience, HTC ThunderBolt is one of the first smartphones to integrate Skype mobile™ with video calling. Rather than relying on a standalone application, a Skype mobile with video call can be made as easily as a standard voice call – with features like presence icons that indicate the availability status of friends built into the standard contacts list. A front-facing camera enables simple video calling, and the 4.3-inch display brings friends and family into clear focus.

“We are proud to not only be bringing one of the first 4G LTE Android smartphones to the Verizon Wireless network, but to offer people the unprecedented speed and ease of use that the HTC ThunderBolt provides to them,” said Jason Mackenzie, president of HTC Americas. “What makes 4G so compelling is not just technology, but what the technology allows people to do. With HTC ThunderBolt and the Verizon Wireless 4G LTE network, 4G is brought to life as people stay connected with friends, family and content faster than ever before possible.”

“Our 4G LTE network and the HTC Sense user experience combine to enable our customers to connect with friends, family and information on a whole new level,” said Marni Walden, vice president and chief marketing officer for Verizon Wireless.  “Customers will see the difference of 4G speeds when accessing content via the Web, Android applications or other Verizon Wireless applications.”

HTC Corporation (HTC) is one of the fastest growing companies in the mobile phone industry. By putting people at the center of everything it does, HTC creates innovative smartphones that better serve the lives and needs of individuals. The company is listed on the Taiwan Stock Exchange under ticker 2498. For more information about HTC, please visit www.htc.com.