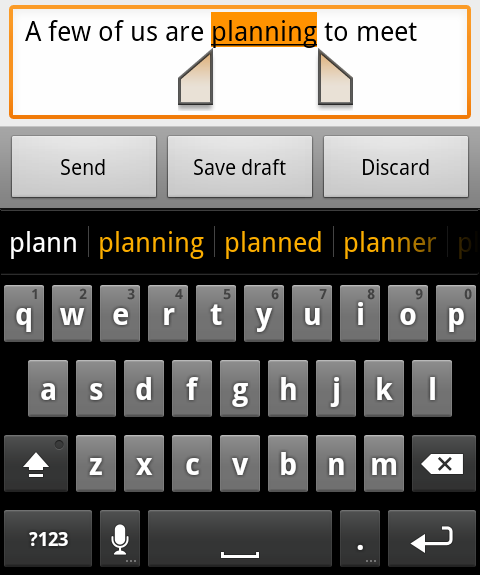 Android 2.3 (Gingerbread) is taking over the planet this morning and the Android Developers team has put together their list of “platform highlights” to get you drooling on an even greater level as you wait for news of when it might be seen on your device.  We’ll now see a much more polished and power managed UI, brand new keyboard, internet calling, control over multiple cameras, and so much more.  We’ve grabbed the biggies and put them for you below, but you’ll want to check out the source link if you want to become an expert.

The user interface is refined in many ways across the system, making it easier to learn, faster to use, and more power-efficient. A simplified visual theme of colors against black brings vividness and contrast to the notification bar, menus, and other parts of the UI. Changes in menus and settings make it easier for the user to navigate and control the features of the system and device.

The Android soft keyboard is redesigned and optimized for faster text input and editing. The keys themselves are reshaped and repositioned for improved targeting, making them easier to see and press accurately, even at high speeds. The keyboard also displays the current character and dictionary suggestions in a larger, more vivid style that is easier to read.

New multitouch key-chording lets the user quickly enter numbers and symbols by pressing Shift+ and ?123+, without needing to manually switch input modes. From certain keys, users can also access a popup menu of accented characters, numbers, and symbols by holding the key and sliding to select a character.

The Android system takes a more active role in managing apps that are keeping the device awake for too long or that are consuming CPU while running in the background. By managing such apps — closing them if appropriate — the system helps ensure best possible performance and maximum battery life.

The system also gives the user more visibility over the power being consumed by system components and running apps. The Application settings provides an accurate overview of how the battery is being used, with details of the usage and relative power consumed by each component or application.

A shortcut to the Manage Applications control now appears in the Options Menu in the Home screen and Launcher, making it much easier to check and manage application activity. Once the user enters Manage Applications, a new Running tab displays a list of active applications and the storage and memory being used by each. The user can read further details about each application and if necessary stop an application or report feedback to its developer.

An NFC Reader application lets the user read and interact with near-field communication (NFC) tags. For example, the user can “touch” or “swipe” an NFC tag that might be embedded in a poster, sticker, or advertisement, then act on the data read from the tag. A typical use would be to read a tag at a restaurant, store, or event and then rate or register by jumping to a web site whose URL is included in the tag data. NFC communication relies on wireless technology in the device hardware, so support for the platform’s NFC features on specific devices is determined by their manufacturers.

The Downloads application gives the user easy access to any file downloaded from the browser, email, or another application. Downloads is built on an completely new download manager facility in the system that any other applications can use, to more easily manage and store their downloads.

The application now lets the user access multiple cameras on the device, including a front-facing camera, if available.