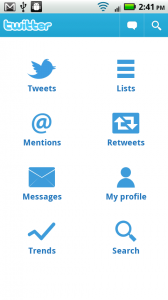 A new version of the official Android Twitter app is available and includes some pretty major tweaks.  Overall the app refreshes the timeline much faster, looks sharper and features a new details page for simple retweeting.  Nice timing right?  Same day that the Facebook app drops.

Some of the new details include:

-Pull to Refresh: This popular feature, which was first available through our iPhone app, functions just as it sounds – when you’re at the top of your timeline, simply pull down to load new Tweets.
-Swipe to Reveal: Swipe across a Tweet to get quick access to several options, such as viewing a user’s profile, sharing a tweet, or replying.
Quote a Tweet: Clicking the retweet icon now gives you the option to quote a Tweet. Of course, you can still retweet as you normally would.
-Hi-res avatar photos

In the market now for free!