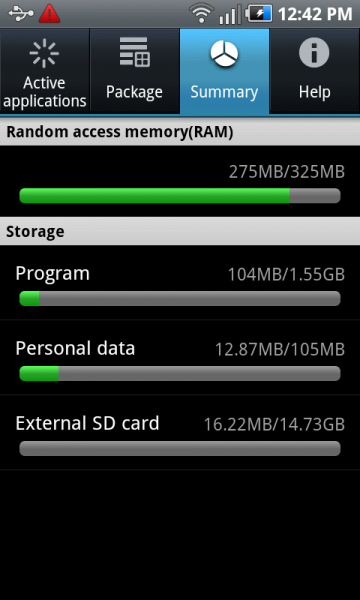 After our unboxing of the Samsung Fascinate, the big argument of the weekend seems to be whether or not it truly has 512MB of RAM or not and I can’t say that I have the clearest of answers for you.  As you can see from the screenshots above, the device displays that it has around 336MB available for use.  This Galaxy S comparison chart we posted from Verizon also confirms this.  HOWEVER, and that’s a big however, there are some other, behind-the-scenes factors here which point to it actually having 512MB total.

Take 5-10 minutes to browse around the interwebs and you’ll find that pretty much all Galaxy S phones display their RAM the same way. Here is a screenshot of the Captivate and Fascinate together; both showing less than the advertised 512MB.  While we seem to be jumping all over the Fascinate, it appears to be acting in a similar fashion to the rest of its brothers.

So why are they displaying this way?  Check out 3 explanations after the jump…

The first explanation you’ll find blames Android 2.1 for the misrepresentation.  When Froyo was announced, there was talk that its new kernel would allow devices to use additional memory that 2.1 was limiting them from.  So a phone like the Fascinate with 512MB, might only be able to use a portion since it still runs 2.1.

A second explanation provided by reader orateam over at XDA Forums points out that dedicated RAM is possibly being used up by the GPU, hence the 336MB being displayed and the amazing graphics performance…

Look at the picture and it says 512mb flash/384mb RAM. Compare that to explanations of RAM for other phone products. That’s 512mb flash RAM with 128 used by…VIDEO. Every computer without a dedicated video card says the same thing. Go look up video cards with dedicated memory and video cards with shared memory. Obviously Sammy’s video cpu uses 128k or RAM and they bundle that with the actual RAM of 384 to say 512. But all Galaxy S have only 384k of Ram to use.

The last explanation I’ve seen is that the device has 176MB or so dedicated strictly to the OS, meaning the device definitely has 512MB, but only 336MB are freed up for apps, processes, etc.

The verdict?  As far as we can tell, with the phone still running Android 2.1 and the way RAM is possibly allotted to the phone’s GPU or OS it does in fact have 512MB, but it won’t  ever appear that way.  We’re hoping that the 2.2 upgrade fixes this and eases the minds of all Galaxy S owners.

Thoughts anyone?  Any super-techy gurus care to weigh in?