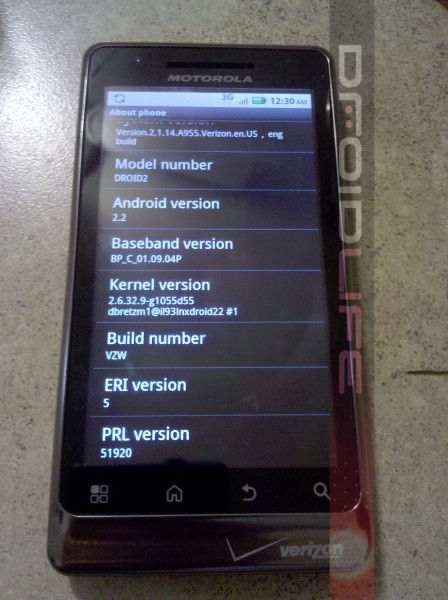 Over the weekend, one of our fantastic readers had the opportunity to sit down for a few minutes with a semi-mysterious future Droid family member that is expected to drop in August, the Droid 2.  When I say “semi-mysterious” I’m simply referring to all of the questions surrounding the device and it’s operating system, Blur or no Blur, feel, weight, Froyo or no Froyo, etc.  From what he’s told us, a few of those questions should now be answered…

So does this answer a few of our questions?  Maybe.  The one thing we all really wanted to know was whether or not the phone would actually release with Android 2.2 on it.  That answer should be pretty close to a definitive “yes” at this point.  To see the D2 running Froyo that has already been masked with the new Blur means we’re close.  This also means that Motorola and Verizon should be on schedule to deliver it to the DX and D1.

It’s too bad they couldn’t have slapped an HDMI port in there and a front facing camera and we’d have arguably the new king of Android.