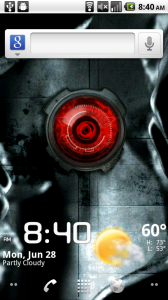 Ahhh yes, the new Bugless Beast by Mr. Peter Alfonso was released this weekend and as you may have expected is of the highest quality.  This newest BB is V0.3 based off of FRF83 which is the final Froyo build from Google that hit the Nexus One just after the 2.2 source code was released.

He’s kept it simple and mostly stock, but has made enough tweaks and changes to make this so worth your while.  He added the Droid X boot animation (and ringtones) we gave you on Friday plus some quick shortcuts for rebooting or booting into recovery.

The biggest change however, might be the addition of the Bugless Beast Toolkit.  The BB Toolkit allows those of you who are overwhelmed by scripts to run them with ease, shows you changelogs, and will eventually allow you to update to the new BB once we have one.  Yay!

1.  Open ROM Manager>Download ROM>Bugless Beast.
2.  Choose “Bugless Beast V0.3.”
3.  Once it finishes downloading it will prompt you to “Backup” and “Wipe data and cache.”

*If coming from another Froyo build you do not need to wipe data and cache.

*It’s probably a good idea to make a backup.