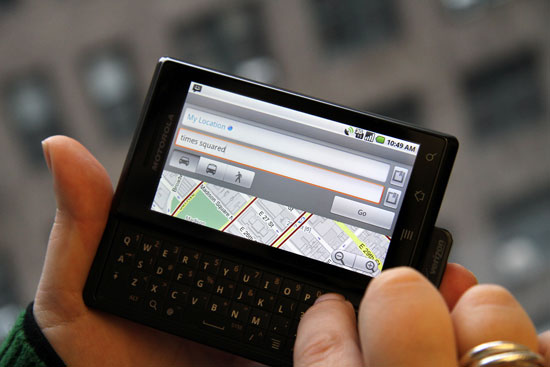 Normally when you get tipped off to update rumors, you tend to turn the other way as to not get too excited over something that is likely about 5% true, but when you get it from multiple people in just a short amount of time, you start diggin’ deeper.

So this is what we’ve got…

Kell B: Hey Leandro! Just wondering if I’ll be receiving the Android 2.1 update on my Droid this Wednesday or Friday?
Leandro P.: Let me help you with this
Leandro P.: The Android 2.1 upgrade for Droid by Motorola is being deployed to a small number of Verizon Wireless test users. It is expected that the broader phased rollout to all Droid users will begin shortly thereafter. But we do not know when you will be receiving the update.
Kell B: So this Wednesday it will go out to a small number?
Leandro P.: Yes, it will not be sent to all of the users at once.
Kell B: Thats good to know. I hope this test goes better than last week’s!
Leandro P.: We all hope so.

So does this mean we let Bitfone off the hook now?  If it’s bricking phones, does that mean they are attempting to mess with the bootloader which would mean no more rooting?  Interesting stuff for sure.

Everyone cross their fingers that Wednesday’s batch goes as planned and we should be swimming in 2.1 by this weekend or early next week.  Or as Leandro so eloquently put it, “We all hope so.”