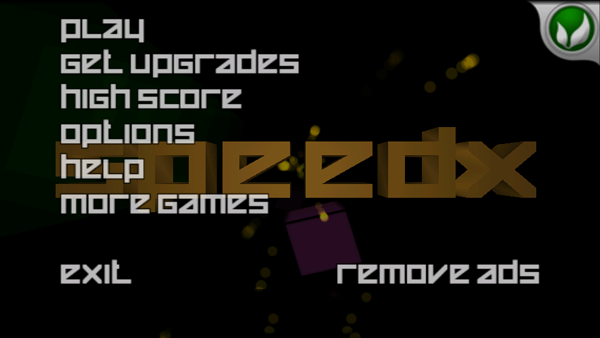 Even though I’ve upgraded my aging Milestone to an Atrix, I still don’t use my phone that often for gaming. Aside from a  few puzzle games, there just seems to be a lack of titles that hold my interest. I’m not the type that likes to play games for long stints – just when I’m waiting for something or need to kill time on the subway.

Usually those games aren’t very graphically-intense, either; this isn’t a bad thing by any means, but I’ve been looking for something that both delights my eyes as well as my synapses. SpeedX happens to do both quite well.

SpeedX is a game where you are travelling down a long tube and steer by tilting left/right. Your mission is to avoid blocks. You score by simply moving forward, and the game ends when you die. Along the way, the playing field shifts from a tube to a flat plane to an inverted tube and back again, taking your eyeballs along for the ride with it. It’s quite the simple premise.

But then again, DDR had a simple premise. So did Audiosurf. We all know what happens to games we think are simple; they usually surprise us with their ball-busting difficulty. SpeedX is no different; as soon as you get comfortable with the level you’re at, it throws curve balls (like color shifts and gravity wells) into the mix, screwing with your perception and making it all the more difficult to stay out of the way of those blocks.

This isn’t a bad thing. It makes the game extremely fun. It also keeps the game from getting stale; Feint integration takes care of any lingering boredom the user might have otherwise. 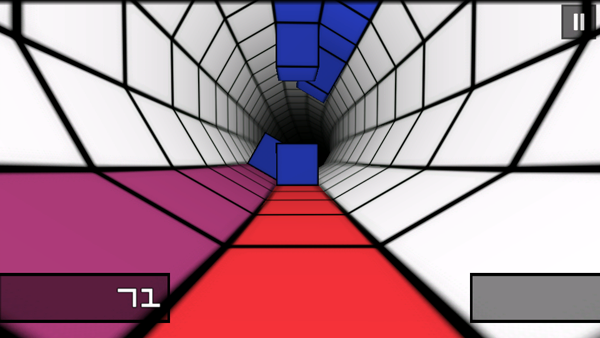 What surprised me the most about this game the most is how it kept my attention; by coincidence, I found that playing music overtop of the default soundtrack (not bad in its own right) makes for a whole different experience. I want to beat my high score in SpeedX. I want to unlock the powerups and game modes. I want to burn whoever thought the “install sponsored apps to get in-game currency” model was a good idea (looking at you too, Gun Bros!)

But more importantly, I want to give props to developer HyperBees for making a game that I want to keep on my phone. And it’s not just me: HyperBees’ Twitter is reporting that SpeedX has been played over 15 million times, with 200,000 players each day. If that’s not a sign of success, I don’t know what is.

You can pick up SpeedX on the Android Marketplace for free, or pay $1.40 for an ad-free and unlocked version.
—
Matt Demers is Droid Life’s app review guy, and recommends listening to “Waters of Nazareth” for the full trippy effect. Or just for the Jesus. Wish Matt a Happy Easter by following him on Twitter!