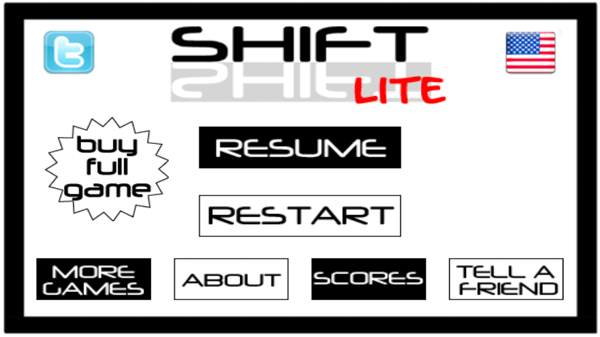 If you’re familiar with my game reviews, you’ll know that I’m not a fan of anything that tries to make precision movements with on-screen buttons work. They tend to be ill-advised affairs, and a frustrating time for all. Something about buttons that aren’t quite 100% responsive and tricky movements just makes my skin crawl; it’s like trying to play Tetris on the highest level when your flip button has a random 1-3 delay. You never know when your actions are going to be performed the way you want, and that makes for a bad gaming experience.

Shift adds something else into an otherwise bad formula: it’s a port of an iOS game, which in turn is a port of a flash game. I’m not going to hate it on principle alone (there’s been some pretty great iOS ports to Android), but it makes me wary. Something as intricate as a platformer needs attention to detail, not a “rush it out to as many platforms as possible” attitude.

Shift is a cross between the video game Portal and an otherwise normal 2D platformer: you are a test subject working your way through a number of obstacle chambers. Your objective is to gather keys in each level to eventually progress to the end door.

The game has standard controls: move left and right, and jump. However, there’s something unique added into the mix that fits with the game’s black-and-white color scheme: players are able to “shift” between the black and white sections of the level. Shifting at the bottom of a pit will flip the level and put you on top of a hill of the opposite color. It’s with this mechanic in mind that you need to complete the levels. Some are timed, others just puzzling – either way, I’ll have to praise the developers for creativity.

Also worthy of praise is the control scheme: I played an early version where there were four buttons: one each for left and right, and a button above them for a diagonal jump. If you had your finger on the “go left” button, you were expected to slide your finger up to the “up and to the left” button to jump. This worked horribly, as sometimes the game wouldn’t recognize your combination and it would kill your momentum before a jump: this is suicide in a precision-based platformer.

However, the last update changed this. Instead of four buttons, there were two: go left, and go right. Holding down one of them would change the other button to a “jump” button, fixing the above problem (see the above video). Good work, developers. Gold star.

I rarely mention this is game reviews due to lack of any good examples, but the music in Shift is sublime. They fully embrace the noir aesthetics and give us an amazing detective jazz soundtrack to go along with our escapades. I fully expect for the rain to start pouring any second and enhance the mood.

It’s not all good, however. Shift is the first free game that’s added video ads to their roulette: every 2-3 levels of the free version, you’ll be treated to the same ad, which is mercifully skippable. This is kind of disrupting, and I’m not a big fan of the practice; I mean, it’s fine if you want to subsidize giving out a free app, but don’t ruin the game experience by taking us out of it to watch something by Swiffer. It’s like if every game’s loading screen was replaced with a Burger King ad: how would that effect my immersion in Mass Effect?

Ultimately, it’s up to the user to decide what they want to put up with. I still recommend Shift as a game: the free version is ad-supported and has a limited amount of levels, while the paid version ($1.99) has 40 and is ad-free.

Download the free version or the paid version here.

[note: I realize the above video is for the iOS version; this was the only gameplay video I could find. Thanks.]

—
Matt Demers is Droid Life’s app guy, and enjoys nothing more than putting on some Coltrane and Rainymood.com. Definitely makes work go by faster. Check it out!

You can find him on Twitter, or reach him via e-mail.