Being a guy with big thumbs, my prime motivation for getting a Droid/Milestone was to avoid having to type with an onscreen keyboard. From testing out my friends’ iPhones to messing around with the in-store models, I could tell that any serious (or, well, inebriated) typing was going to be a chore.

Motorola gave me best of both worlds, but I still use my on-screen keyboard to type out quick messages, or to enter the first couple letters into a search field. When it’s working, Swype is usually my keyboard of choice, but since it has this habit of resetting its tutorial and then not letting me swype until I’ve completed it again, I’ve been forced to look elsewhere. 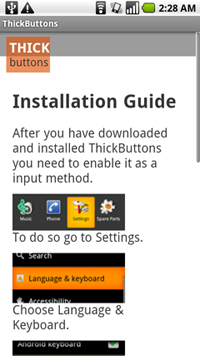 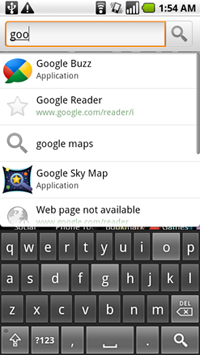 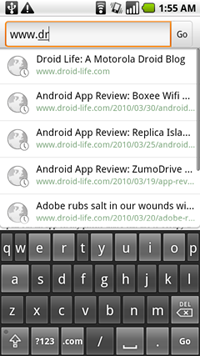 I read about ThickButtons and thought it was a good idea: I mean, a keyboard that automatically makes buttons bigger, depending on the likely next letter? Genius! Finally, a keyboard replacement that suited the needs of me and my large-handed brethren.

However, when I booted it up, I came to a stunning realization: the problem with my typing had nothing to do with the buttons at all. It was all about location.

While Swype is good and ThickButtons had a good idea, ultimately, I type by memory. I have been using the QWERTY keyboard configuration for nearly two decades (I figure I’ll give my toddler self a year or two leeway) and, frankly, know where all the keys are by heart. When I’m typing, I am reacting by instinct and memory, not sight. 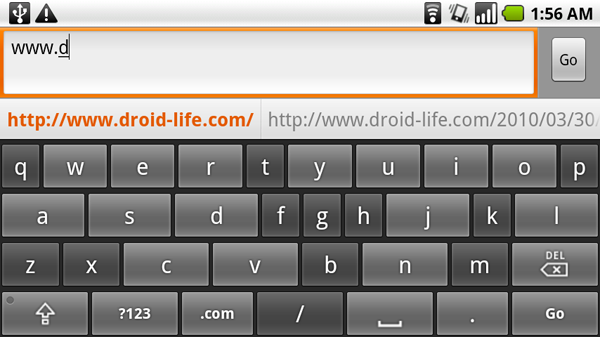 ThickButtons turned that on its head. I actually spent -more- time hitting eroneous keys that had spread themselves out over where I thought others would be. I actually had to mentally force myself to keep track of every movement and placement of button so I wouldn’t screw up, and this, ultimately defeats the purpose of the system.

To its credit, you can adjust the amount keys change size between “Little”, “Moderate” and “Significant”. I was using “Moderate” as it was the default for the app, but I felt that changing the key width to smaller or larger would just defeat the purpose of the app or exacerbate the problem.

Ultimately, for what I was using it for, ThickButtons didn’t serve my purpose. For Droid/Milestone users, I have a feeling that the touchscreen keyboard takes a back seat to the physical, only being used in precision-friendly situations.

While it may have its uses for Android owners who don’t have the hardware input option, the learning curve to using ThickButtons doesn’t seem to make it worth replacing a quick Swype, or even the default keyboard. I’d have to recommend a pass on this app, but you’re welcome to try it and comment with your own results. Happy typing!

Matt Demers is a Toronto writer whose hands just can’t decide if they want to fit snugly into L-sized gloves, or enjoy the roomyness of XL. You can find more of his writing on his personal site, Matt Demers.com