I’m going to admit that I didn’t buy my Milestone to play games. When I’m on the go I usually have my DS handy or am engrossed in my iPod.

However, sometimes I’m just too damned lazy to pull out either one of those devices. I have a couple games installed on my phone for that purpose, and whenever someone decides that they want to see what the Droid’s capable of. 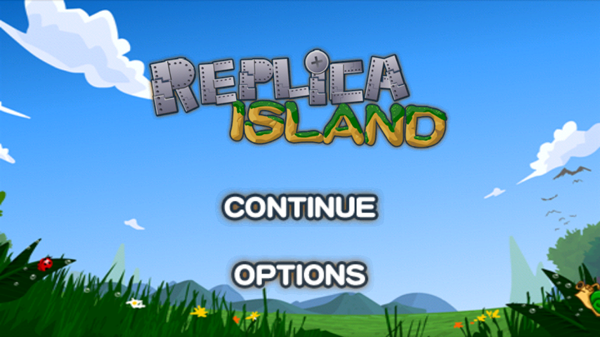 However, this past week I’ve been pleasantly surprised by a game called Replica Island. Not only did I find a game that runs well on all Android phones, it’s an exclusive to the platform; I usually take this as a sign of quality, as money-grubbing developers tend to seek the big money of the iPhone.

The game is a simple side-scroller featuring everyone’s favourite mascot, the Android. He rolls along levels collecting red gems and energy pellets, gaining an invincibility boost from every 20 of the latter. He can fly with the aid of limited jet pack, and can defeat enemies by smashing down on them from above. The developers also implemented a mind-control ability, enabling the Android to get his robotic enemies to do his dirty work for him, usually ending with their explosive demise. 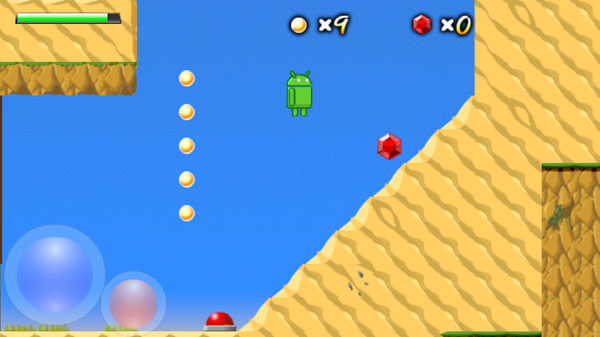 So that’s all fine and dandy, but what really sticks out is the inclusion of character dialog and a storyline. In this way, Replica Island reminds me of indie game darling Cave Story, as the storyline and gameplay share many common factors – the main character is looking to claim a power source before a malevolent corporation does, while being assisted by a “good” mad scientist and a female companion. Simple, yet effective.

The controls of Replica Island are dependent on your phone; anything other than Android uses the phone’s accelerometer to move the Android side to side. There are two onscreen buttons: one to jump (and to fly when held) and another to attack from above (or use the mind control mechanic when held). These buttons are responsive, large, and do the job well.

I’m very picky about my touchscreen controls: they’re very hard to mess up, but the developers did a good job to make sure that the game was easy to pick up.

On the Droid/Milestone, we have the luxury of a D-pad, which makes things much better. The space bar and “A” key both control the Android’s jump, while the D-pad’s button can be configured in the options menu to control the attack. It took a little while to figure that last configuration out, but it was well worth it. 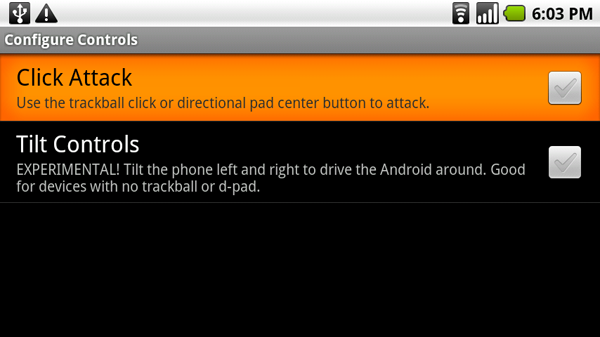 Make sure “Click Attack” is checked to enable the middle D-pad button for attacking.

The game plays and looks very much like a Gameboy Advance game; while some graphics aficionados may decry this, I think it’s a good idea, considering the different powers of different phone models. There would be nothing more infuriating to me, as a consumer, to find out that my phone couldn’t support a game.

However, the main thing I have a problem with when I play Replica Island is the fact that the Professor Kabochanomizu (the aforementioned “good” scientist) didn’t seem to take the laws of physics into account when he built the Android. Your little green buddy accelerates like a bullet and does not seem to lose speed while going up hills; this tends to be a little bit of a problem when you’re trying to make precision jumps, or want to collect those last few energy pellets without careening off walls.

Ultimately, it’s a very small gripe to make. You’ve got a decent story, 40 levels of play, easy-to-pick up gameplay and a pricetag of $0. Yes, cheapskates of the Android universe, this app is free.

Well worth a download, and will keep your smaller siblings/children amused for a little bit when you’ve forgotten another suitable distraction.

Matt Demers is a native of Hamilton, Ontario and waited for what seems like forever for his Milestone. His large thumbs thank him, though, for showing mercy and giving them a tactile keyboard to type on. He writes opinion and review columns for numerous places around the Internet; his work can be found primarily at his personal site.